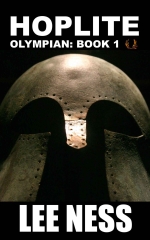 The Young Alexander dreams to compete in the OIympic Games himself. Turn back the time to 440BC, and follow the then child on the first adventurous path. Lee Ness set the opening scene for a series of books. In Hoplite – Olympian: Book 1, Alexander is trapped aboard a troop ship, while following his father, Lysander, a strong hoplite. The battle of Samos is interwoven in the story. Lysander dies on the battleground, the young Alexander is initiated into the Greek army to be trained, bullied, neglected and abused. Fatherless and separated from his mother, the young boy is left to his own devices, the cruelty and grace of surrounding hoplites, each with a personal agenda, high stakes and not reluctant to show hate or revenge.

Next to the descriptions of fights and training exercises, the author throws in lively plots of narrow escapes, dangerous discoveries and a vivid example of a martial court Greek style with sudden twists and an unexpected outcome. It’s totally different stuff than Lee’s previous book D.E.M. – Deus Ex Machina, nevertheless engaging all the way to the epilogue.

Lee Ness writes both fiction and non-fiction books and non-fiction articles. He has a historical fiction series set around the Olympics in Ancient Greece circa 440BC and a technological thriller called D.E.M. – Deus Ex Machina.
His first book The Sports Motivation Master Plan passes on the experience of many years coaching athletes in multiple sports. Lee’s articles appear in Athletics Weekly, on speedendurance.com and on stack.com. Lee is head coach and chairman at City of Salisbury Athletics and Running Club, was Wiltshire Sport Coach of the Year in 2014 and Wiltshire Athletics Coach of the Year in 2015.