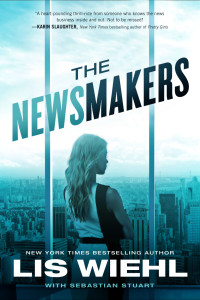 The beautiful Erica Sparks just got a dream job at at Global News Network (GNN) in New York. As newly hired field reporter she is out to search the truth. Once landed at GNN, founded by Nylan Hastings, she meets producer Greg Underwood, off-kilter handsome, lean and fit in his early fourties. He sends Eric off to an interview with the Duchess of Cambridge (a.k.a Kate Middleton) , but just before that interviews, she witnesses the Staten Island ferryboat crash into Battery Park, Manhattan seawall. The in-depth follow-up of that crash not only causes GNN’s popularity reach sky high, but also Sparks’ star to rise high.

Both anchorwoman with her own anticipated show, The Erica Sparks Effect, mother and reporter, never leaves Erica a dull day. The few people she can trust at GNN, where small fish compete with sharks, discover macabre facts behind the ferry crash. One after another key persons get killed, which leaves Erica almost to her own devices. Her daughter Jenny, under custody of Erica’s ex-husband Dirk, means a lot to her, but is at a physical and emotional distance. The reason for the divorce is disclosed as well during the hunt for truth and justice along the book’s story line. Hopefully the demons from her past haunt her not as fast as she can prove who’s the one who ordered the killings.

Lis Wiehl is competent in building up suspense, let the tense relationship with Greg Underwood. evolve, but not end in sexual encounters too soon, and jump to a happy end of this whodunit. The Newsmakers testifies to an insider’s knowledge of the big-time news networks, and treats readers longing for an entertaining page-turner well.

I received a free review copy from the publisher Thomas Nelson through Netgalley in order to share my personal review with you.