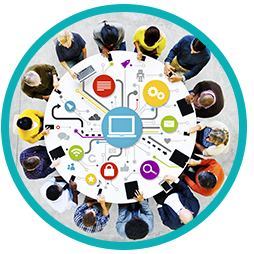 International Institute for Learning organized its first Agile and Scrum Virtual Conference. 5 keynotes and 20 video presentations, Q&A, chat, and networking opportunities in an slick and smoothly working online environment. Not only IT, but many companies in other sections are benefiting from Agile approaches like Scrum. Too much to watch in a single session, with the 1,100+ other concurrent watchers. No problem, since IIL offers to watch sessions on-demand for additional 90 days. That’s an opportunity regular offline conferences cannot offer. Welcome to the 21st century 🙂

In a two-part review I’ll highlight the mixture of video presentations and keynotes I attended on 2 June 2016.

Recovering project manager Angela Johnson ( PMP, PMI-ACP, CST, a founding member of Collaborative Leadership Team, a Certified Scrum Trainer, and Agile Transformation Coach) considers Scrum as simple, yet not simple. It’s lightweight. Application is not easy. Do you face Scrum problems or people problems? Scrum Master seen as servant leader may turn out to be the one ordering pizza. Facilitating the team means so much more. Scrum Masters are no secretaries, don’t necessarily have product in-depth knowledge. The Scrum Master is a leader, and a coach, not necessarily leading every Scrum meeting, not even the Daily Scrum. Running Scrum ceremonies may overlook the people stuff. Michael James developed the scrum master checklist, but there’s more. Dale Carnegie provided principles on influence, honesty, listening, encouraging, appreciation. How to Win Friends & Influence People? is a perfect addition to the Scrum Guide regarding people aspects. Harvey Robbins focused on dysfunctional teams in Why Teams Don’t Work, worth reading too to learn from characteristics of bad, good and best teams. Versatility plans which were developed by David Merrill and Roger Reid (Social styles) with drivers may be of help. Be clear to your team on do’s and don’ts. There’s we, not me in teams.

Scrum is different. Change is hard, and that’s why a Scrum master role is difficult. It’s your job to help the organization migrate into the Scrum way of working and maximize the delivery of business value. Don’t let words get in the way. Ask questions. Don’t mark people as impediments.

Manuel “Manny” Gonzalez has proven himself to be a successful global strategic leader in both the nonprofit and corporate sectors in an international arena. His strengths lie in transforming organizations into Agile performing environments. As CEO, Manny speaks around the globe to advocate for Scrum Alliance’s mission to transform the world of work by promoting widespread adoption and effective practices of Agile and Scrum.

In the period after 1950, the human population doubled, growing from 2.5 billion to 5 billion, in just four decades (less than average the human lifetime).  Factories, production lines, and minimally skilled workers were put into place across many industries.  All that was needed were a few knowledgeable leaders at the top to keep the machine going. Agriculture, industrialization and the development of services industries in the computer age, brought us in the where we are. Cultural shifts through the process of creative destruction trigger innovation and social changes. New customer and workplace demands require changes in the way work is organized.

Gonzales emphasizes the importance of relationships, value creation, and honesty (more specific integrity and transparency). See how well these connect to the Agile Manifesto.

Companies refer to their problems as recruiting, retention, and employee development. Employees are looking for sustainable businesses. Things are changing fast. Participate or be out of business soon. Be open for new ways of leadership and management. Agile leadership is the new paradigm, Agile is the future of work. Organizations like Scrum Alliance are out to inform, help, coach, empower, provide resources and support teams and corporations on Agile and the transformation from traditional way of working towards Agile. Change takes iterations, time and reinforcement. Agile is no simple key to be on or off.

Empowering leaders treat people like adults! They know how to do the work! @ScrumAlliance @IILGlobal #AgileCon16

It’s not about you, it’s about them. Live through your principles. Walk the talk. Enable self-organization. Grant time to grow that and enjoy the journey. The future belongs to socially responsible companies. Bear in mind Scrum and Agile are no IT ‘thing’ anymore, as the State of Scrum report shows.

Scrum and Agile are simple but not easy. Kind of like the Bible. #Personalnsight @ScrumAlliance @IILGlobal #AgileCon16

Jesse Fewell (writer, coach, trainer) kicked of setting the stage. Wasn’t ideal team size about 7 plus or minus 2 people? Lightweight approaches like eXtreme Programming (XP) stressed the lean and small teams. Scrum advocates small teams too, encouraging self-organization. With the advent of Agile popularity discussions on application of Agile principles in larger organizations continued. Scaling agile became a necessity. Simplicity may lead to micromanagement, silos and more standards. Autonomy can lead to role confusion, duplication and more variation. A paradox to be solved. Do your homework. Learn the various frameworks, and case studies. Other companies already invented this wheel.

Scaled Agile Framework (SAFe) help non-Agile organizations to become agile ones. Intel did a roll-out to 170 teams in just 2 months. Large Scale Scrum (LeSS) is an alternative. There’s more than one way to organize your work. Nokia Networks did it with LeSS in 2005. Both workers and leaders need to be coached. Regardless the commercial names, there’s consistency in principles needed for these kind of implementations:

Move from big to awesome!

Making the decision to move over to Agile may make you think of trying to eat an elephant. Where to begin on this Agile Journey. AgileDad, V. Lee Henson helps.

If you want to dig further, you can embrace AgileDad’s 12 step program to Agile success. Don’t forget to bring in an Agile coach to help you along the path to success. Why? Because it takes time, honesty, trust, communication, a clear vision and strategy, transparency and supportive leadership.

Scaling is by taking steps one by one. Failure is an option. Crawl, walk, then run.

Jeff Sutherland (CEO, Principal Consultant and Trainer – Scrum, Inc., Co-creator of Scrum) promises a way to double your work in half the time. Well, that’s a teaser, isn’t it?

Scrum is important because of:

It is not the strongest of the species that survives, but rather, that which is most adaptable to change. #Darwin #AgileCon16

Now in 2016, Scrum is everywhere. In sales, marketing, finance, manufacturing, families and weddings, agriculture, space and government. Sprint after sprint, team by team. Velocity up! More people freed up to aggressively get more done in less time. Read Jeff’s new book, don’t wait for the movie 😉