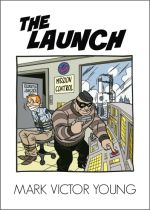 Mark Victor Young mixes humor, comics and a crime story in one plot. The Launch showcases Watson Sinclair and his friend JC Dubois, wannabe cartoonist for the daily papers. They have a sick plan to realize their dream. They kidnap Ray Bennett, editor of Royal Features Syndicate and manage to sneak into Canada to collaborate on a new comic series, and a hopefully successful launch. Narrow escapes, stupid failures, attempts to hide their ventures from their families and the police.

E-mails and comics are thrown as intermezzos, there’s so much to laugh about. Young did his best to create lively characters, typical male conversation lines and intentional twists to keep his readers locked in until the final chapter. A great return of the author of Awkward Stages.

Happily married since 1992 and a father since 2003, Mark Victor Young has been a writer for as long as he can remember. He was born in Toronto and grew up in London, Canada. He was the first winner of the Lillian Kroll Prize for Creative Writingat Western University, where he also completed a degree in English Literature. He has published novels, poetry, short fiction, feature articles, comic strips and book reviews in various media.

He lives with his wife and daughter in London.