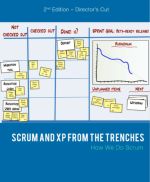 Back in 2007 Henrik Kniberg wrote Scrum and XP from the Trenches in a single weekend while feeling sick. Not that Scrum and XP practices caught him off-guard, but merely as time found at last to write down first-hand experiences. The book went viral, and Henrik Kniberg went on, consulting and coaching development teams at several companies. In 2015 it was time to revisit the first edition and update with newfound insights. Scrum and XP from the Trenches – 2nd Edition speaks of amazement how things were written down eight years before, elaborates on patterns and anti-patterns regarding the various Scrum events, roles, artifacts, as well as XP practices, though the most attention still goes to Scrum. Engagements at e.g. Spotify and LEGO provided a lab for experiments, inspect & adapt, making mistakes and consolidate practices that proved their value.

A Scrum master checklist, hyperlinks to the Spotify software engineering approach, product owner in a nutshell resources, tips on distributed and dispersed teams, offshoring, slack time, estimations, and up scaling Scrum teams all got a place in this readable book. Highly recommended for every Scrum practitioner who wants to learn from fellows.

Henrik Kniberg is a consultant at Crisp in Stockholm, specializing in Java and Agile software development. He has founded several Swedish software companies and is passionate about learning, teaching, and applying the art of software development. Henrik takes a holistic approach and enjoys adopting different roles such as manager, developer, scrum master, teacher, and coach.