Yesterday Salesforce World Tour 2016 Amsterdam was conducted in the RAI conference center. An impressive number of 4,000+ professionals participated in this free event with keynote speakers, breakout sessions and expositions of new Salesforce functionality, Salesforce implementation and integration partners, and success stories. Since I took a Salesforce Admin training myself at Capgemini Financial Services in summer 2015, I took the chance to renew my overview of the Salesforce platform. On my way to Amsterdam a switch malfunctioning near Zwolle got me delayed for 30 minutes. Nevertheless, waiting lines at the security checks, cloakroom and registration were almost non-existent. Right on time I was ready to roll. 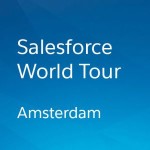 Already on Wednesday I installed the WorldTour Android app. DoubleDutch created this app which not only shows the agenda, activity feed, achievements, and background information about speakers and Salesforce, but also links to LinkedIN, Twitter, and Facebook. You can see attendees, post updates, monitor Salesforce’s Twitter account,  Partners, Customer Success Expo details, and a Blog. I used the app throughout the day to add notes to each session and post updates to the app users, and my Twitter timeline. I valued the possibility to share notes and email them directly to myself.

Unfortunately the WorldTour app stopped working a couple of times during the day, but restarted again without problems or loss of data. And, remarkably, photos added to updates were not posted to Twitter.

Prior to the morning keynote, admins could already be introduced to the Lightning experience of their habitat, the Home and Setup screens of Salesforce. The presenter pushed admins to get out of the chairs, walk around, talk to their customers and guide their businesses to the future.

Marc Hoenke (Director Brand Communications at Salesforce) welcomed the audience and featured customer stories from Accenture, and kicked off Girlsday / Girls in IT with Neelie Kroes. 60 young girls were invited by Salesforce to attend World Tour. Another 10,000 other girls swarmed around Dutch tech firms yesterday to get inspired to become a “techie” themselves.

To serve the large group of attendees in each breakout sessions every seat came with headphones, causing many presenters to be a little confused to talk to people with headphones on and no large speakers in the rooms. So no, you’re not watching at pictures from a silent disco.

Field Service adds a new chapter to existing Customer service with Salesforce. Scheduling of appointments, dispatching work orders, navigation to your next appointment, recording the customer’s signature, it’s all possible in the new Lighting Field Service to deliver a truly connected customer experience in the age of the customer.

Salesforce’s Dr. Wolfgang Lippert discussed the rise of personalized medicine, eHealth, predictive and preventive care, transforming the healthcare and life sciences industry.. Putting the patient first got a personal touch with Jeroen Tas (Philips Healthcare) and his daughter, a Diabetes 1 patient. Migrating from the United States to the Netherlands, losing all your medical records and still facing the 100+ health-related decisions every day is something IT can support. Precision is needed because of more educated patients, hospital’s accountability on treatment outcome. Salesforce Health Suite Labs is perceived as complete health and Life Sciences platform. We saw some impressions of the work done at Philips and Radboud UMC.

NIBC Bank deployed the Financial Services Cloud, a growth platform to accelerate relationship manager productivity, and help them build deeper, 1-to-1 client relationships anywhere and on any device. In 3 months time a call center was in-sourced, and Salesforce successfully deployed, Richard Leijnse told the audience.

Neelie Kroes was interviewed by Burke Norton (EVP at Salesforce) on challenges for women in European politics, large organizations, and startups. Currently Kroes is heading the Startup Delta, and will join the board of Salesforce. According to her, startups are responsible for bread and butter. Motivating people and knowing how to be a team player are crucial. Boundaries in whatever form shouldn’t exist. She’s pragmatic and doesn’t give up. Her advice to young people: dare to take risk, show entrepreneurship. Explain what you are good at.

She then was joined by Ben Woldring (Bencom Group) who started comparison websites when he was still 13 years of age. Comparing prices of mobile telephony, internet subscriptions, and other utilities disrupted the market. Ben always wanted to sell things and create value for his customers. Once solely operating from his parent’s home, now he is proud of his own team of programmers. The Dutch are relatively open for innovation and agile, says Ben.

Yasir Khokhar (Connectera) who was praised for his Internet of Cows solution to increase productivity of dairy farmers, emphasized perseverance and boldness.

KPN Ventures‘ Herman Kienhuis sees a growing local market of venture capitalists. Many startups, and a huge influx of capital. Boldness is key, and the start up’s horizon may be further than the Dutch market only. Data is the new oil. Herman sees many powerful technology initiatives in the Netherlands in various sectors.

Since its inception Salesforce Community Cloud in 2013 7,000+ communities were created. Business processes, social media accounts, and website functionality is combined. The presenters from Germany and South America showed a demo of a fictional coffee company and online payment gateway Eway, ‘personal banking’ provider Barclays, and Wärtsilä, interacting with customers.