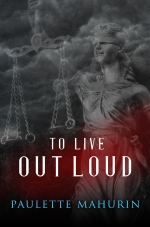 After my previous reads and reviews of The Persecution of Mildred Dunlap (2013) and His Name Was Ben (2013). For the rather short book To Live Out Loud, Paulette Mahurin chose the Dreyfus affair and Emile Zola’s “J’Accuse!” writing as theme. More than spontaneous connecting “J’accuse” to Emile Zola my background knowledge of the situation was zero. Explicit antisemitism in France in 1895 let to the public degrading of a Jewish officer, Alfred Dreyfus. Later Dreyfus was sentenced a lifelong imprisonment, accused of spying for Germany. His family ties in the Alsace, the occupied by the Germans, were the proof. Only one is brave enough to stand up against the false accusations and peculiar legal process, Emile Zola. The popular journalist wanted to justify Dreyfus and wrote his “J’accuse” letter.

The protagonist is a fictional character, an engineer and friend of the family of Emile Zola. The storyline follows the prejudiced court cases, verdicts and appeals. It costed Zola a lot of money and ultimately his life. Thanks to changes in French legislation, e.g. the separation between Church and state, bring freedom to Dreyfus. The story’s still relevant today. Many examples of injustice, discrimination or racism require courage to speak for the suppressed and ask for justice, and live out loud, just as Zola did.

Paulette Mahurin lives with her husband Terry and three dogs, Max, Bella, and Lady Luck in Ventura County, California. She grew up in West Los Angeles and attended UCLA, where she received a Master’s Degree in Science.

While in college, she won awards and was published for her short-story writing. One of these stories, Something Wonderful, was based on the couple presented in His Name Was Ben, which she expanded into the fictionalized novel in 2014. The first week out, His Name Was Ben, made it to top ten books sold in the Amazon Kindle store (topic: health/wellness/cancer). Her first novel, The Persecution of Mildred Dunlap, made it to Amazon bestseller lists and won awards, including best historical fiction of the year 2012 in Turning the Pages Magazine.

Semi-retired, she continues to work part-time as a Nurse Practitioner in Ventura County. When she’s not writing, she does pro-bono consultation work with women with cancer, works in the Westminister Free Clinic as a volunteer provider, volunteers as a mediator in the Ventura County Courthouse for small claims cases, and involves herself, along with her husband, in dog rescue.

Profits from her books go to help rescue dogs.

The author provided me a review copy.