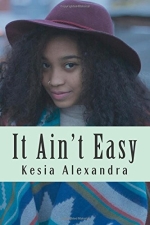 Kesia Alexandra approached me to read and review her short story collection It Ain’t Easy. Raw, full of slang, yet engaging stories about growing up in Washington D.C. Teens that are confronted with the fruit of their sexual encounters. Boyfriend not willing to take responsibility to take care of a child. Broken families, the search to stay alive while in debts. Self-discovery and class differences. Down to earth like in “Every fall, Wellcourt Prep sent a bunch of juniors abroad for a semester. A girl named Cindy Patton was studying in Italy but got kicked out of the program for having sex with one of her professors. When she returned to America, she was put on anti-depressants. Next thing everyone knew her picture was set up on an easel in the main lobby with “Rest in Peace” above it and “4.5.89-10.8.05″ underneath.”

Emotions, and the every day lives of Washington D.C. residents, told by these people. Lively characters, and well-written.

Kesia Alexandra was born in King of Prussia, Pennsylvania to Paul and Anita Webster. Kesia Alexandra is a 25 year old writer from Washington, DC. She began writing professionally at 17, reviewing books for the Amsterdam News in New York.  She is the co-author of “Freshman Year: Bullies Beware!” and the author of “It Ain’t Easy” and “Eating off the Floor”. Kesia has been published in various literary journals. In 2014 she received an award from the Society for Humanistic Anthropology for her short story “It Ain’t Easy, Girls, It Ain’t Easy”. She was invited to speak on the same story at a conference hosted by the North American Review.

I was given a copy of this book by the author for the purpose of unbiased review, while all the presented information is based on my impressions.