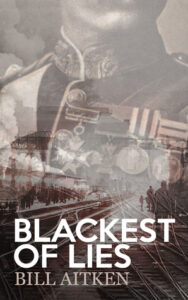 Before reading Blackest of Lies I knew nothing on the mysterious death of Lord Herbert Kitchener in 1916 during World War I. Bill Aitken came across Donald McCormick‘s 1959 book The Mystery of Lord Kitchener’s Death, which kept his interest to write his own recounting historical novel. The book takes a sentence of death imposed by the Irish Republican Brotherhood (IRB). A man hunter assassinated Kitchener. How would the British public and government react? Can MI5 or MI6 trace down who did it? And will Kitchener’s death influence the course of war?

Lieutenant Chris Hubert’s suggestion of to replace Kitchener by a lookalike Colonel Henry Farmer is a clever way to distract the Irish, gain some time. But when Kitchener is invited to come to Saint Petersburg,it’s better fore all that he won’t come back. Read for yourself how Fritz Joubert Duquesne, a Boer, British Secret Service, counter intelligence, German U-75, and stormy weather around Orkney take their toll and have this fast-paced, engaging story come to an end. Are both HMS Hampshire and the double ‘Kitchener’ gone?

Bill Aitken is a former officer of the Royal Air Force who served in the UK, Cyprus and Norway. He is a Fellow of the British Computer Society and a Chartered IT Professional. In the late 90s he worked for Capgemini (just like I still do), and taught Business analysis a few times at the Paris Capgemini University. Although he has written several books on IT subjects, this is is first foray into the dark art of fiction writing. Bill now works as a Competence Architect for the oil and gas industry in the Middle East. In his spare time, he paints and writes far too much code for his own good.

The author gave me a review copy.