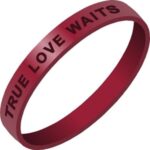 Purity ring, not the Canadian synth pop band, but the affirmation that true love waits. Remember Rebecca St. James singing Wait for Me (2000)? Since she finally married herself, she lets her fans waiting for new albums. Chastity was and still is a favorite topic to preach about in (evangelical) churches. Practices are different, divorce rates among Christians are comparable to non-believers, but still, picture perfect as norm. Since the 1990s, the Purity Movement has been at the center of the national sexual conversation, including White House-issued abstin ence programs. What’s the effect on the generations since then?

Filmmakers Matt Barber and Brittany Machado interview leaders in the True Love Waits campaign, such as Richard Ross, critics of it, academics, and—most effectively—normal people who were hurt by it and others who still willingly follow its tenets. The result is is the 87 minutes Kickstarter funded documentary Give Me Sex Jesus.

“Jesus, don’t come back before I’m married and have sex.”

Modesty, struggles, discipline, pornography versus ‘real life sex’, conversations on how far is too far, clothing, avoiding watching or being exposed to arousing materials led to men and women having sky high expectations of sexual activity after marriage. And what problems could a Campus Crusade for Christ founder’s grandson get upon discovering he’s gay. In church camps you learn everything. Guilt, social conditioning, keeping up appearances, politics, and adjusted, more articulated contemporary points of view: it’s all shown in the documentary. 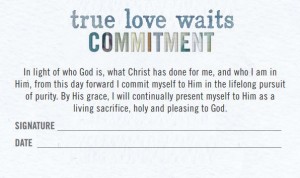 Back to the music: Lie Down In Darkness (Photek Remix) by Moby is played in the background of the documentary.

Have a watch yourself. The documentary streams for free on Vimeo. If you want to read more, try: