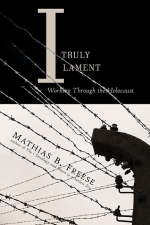 “What an eternal moment this is, last memories, the only I cannot have taken from me.” I Truly Lament—Working Through the Holocaust is a fictional collection of memories. Observers being observed, killers being killed, private parts exposed. The Holocaust revised, sometimes rewritten, redone, undone, denied, intensified, remembered and played with. Golems asked for help, collectors of Hitler curiosa, Adolf Hitler making rare love with Eva Braun, rabbinical advice to use the mind as compass, or Leviathan explaining the evil empire. The book contains both precarious, hilarious, satirical, raw and painful short stories. “in the spaces between the guards and the guarded is everything one needs to know.”

Being the hunter or the hunted. “We admittedly lose a good deal of our humanity as we perform our duties. It’s a troubling cost that drives us to be so bitterly cruel, to exact personal measures of spite to ease our own raw deals as guards.”

The bundle’s got an imagined interview with Eva Braun during her last days in the Berlin bunker a week before committing suicide, the love story of a Hungarian cantor, searches for meaning and rest in meaninglessness. Certainly not everyone’s #1 topic to make such intelligent jokes about. Despite the sensitivities, the exaggeration also helps overcoming the past and chosing to live on here and now.

Mathias B. Freese is a writer, teacher, and psychotherapist. His recent collection of essays, This Möbius Strip of Ifs, was the winner of the National Indie Excellence Book Award of 2012 in general nonfiction and a 2012 Global Ebook Award finalist. His I Truly Lament: Working Through the Holocaust was one of three finalists chosen in the 2012 Leapfrog Press Fiction Contest out of 424 submissions.

The author provided me a free review copy.