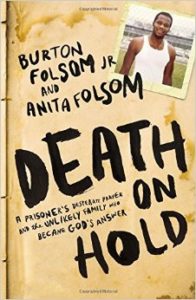 In January 1983 Burt Folsom read Kurt Andersen‘s article The Death Penalty: Eye for an Eye in Time Magazine about Mitch Rutledge, a black man on death row with an IQ of 84 who said he was sorry for what he did. “Forget him,” were the last words. Burt wrote Mitch a letter and discovered a man more intelligent and interesting than the article had shown. With his wife Anita, Burt started writing, and visiting Mitch in Holman Prison, where he was detained. Mitch used the letters to teach himself to read and write.

Death on Hold is part memoir, a coming of age by Mitch Rutledge himself. He recounts his youth, the gang life of human trafficking, selling and using drugs and fatal violence, including the murder for which he was sentenced in 1981. Rutledge is open about life in prison, the similarities with the violence, politics outside. Mitch also testifies about the wonderful way God revealed Himself to Mitch. Ever since Mitch learned to trust in God, resist sinful practices in prison, develop himself up to the point where he currently is a community manager and public speaker on making the right choices to an audience of teens at risk. While death row was changed into life without parole in 1989, in 2015 Mitch still lives as inmate, having survived tuberculosis and many death threats by inmates.

Mitch’s story is alternated with poems, short letters, and stories by Burt and Anita Folsom, a Catholic sister Lillian, Bill, his sisters Pam and Rachel. Mitch is counted as one to make a difference, propelled by his desire to make his life the call.

More resources on the book are at www.deathonholdbook.com.

Anita Folsom has directed Hillsdale College’s Free Market Forum since 2006. She has written for the Wall Street Journal, the Detroit News, Continuity, the American Spectator, Human Events, and other publications. She is the coauthor of FDR Goes to War and Uncle Sam Can’t Count.

Burton Folsom holds the Charles Kline Chair in History and Management at Hillsdale College. He has written for dozens of publications, including the Wall Street Journal, Business History Review, and the Washington Times, and he is the author of eight books, including Myth of the Robber Barons and New Deal or Raw Deal.

I received a free review copy from the publisher Thomas Nelson through Booklook Bloggers.