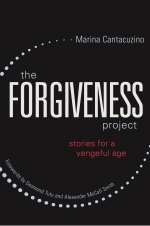 The Forgiveness Project is a UK-based charity that creates opportunities for people to consider the limits and possibilities of for\forgiveness. It works with individual personal narratives to examine how forgiveness, reconciliation and conflict resolution can be used positively to break the cycle of harm and violence. The Forgiveness Project is a secular organization working with people of all faiths and none. Its founder, journalist Marina Cantacuzino collected a variety of these narratives from all over the world to be included in the book The Forgiveness Project. While Desmond Tutu provided a foreword, don’t expect a focus on South Africa, apartheid or politics. In this book you’ll find survivors of Anders Behring Breivik‘s attack on the Norwegian island of Utoya alongside victims of the atricities in Northern Ireland in the 70’s, and doctor Joseph Mengele in World War II concentration camps. Rape victims, women who lost their husbands in accidents or murders, war victims that chose forgiveness over hatred. Everyone has a personal definition of forgiveness and a background story on the process to conclude that forgiveness is the better option.

Forgiveness is no excuse or free pass to repeat the offence. Forgiveness is a word no one can agree on. The act of forgiving is fluid and active and can change from day to day. Strongly motivated, convinced of a godly command, or simply aware that the attacker, killer or rapist is as human as the victim’s. Nowhere does the author preach or force her readers to always forgive. She feels uncomfortable with the great deal of conviction and certainty when it comes to forgiveness. Certainty and black-and-white thinking is often just a step away from intolerance, absolute faith, fundamentalism and even radical extremism. One should leave room for personal differences, nuances and the acknowledgement that the process of forgiving is more important than the result, forgiveness or being forgiven. To forgive also invites judgement and righteousness, spiritual and emotional healing and a second chance.

Maria Cantacuzino’s background is in journalism. Her work has appeared in most mainstream publications in the UK, including The Guardian, The Telegraph, The Independent, The Times, The Observer, plus many magazines both home and aborad, and most recently in a regular blog for The Huffington Post. She has collaborated with NGOs on overseas campaign stories and in 2001 co-created the One in Four exhibition as part of the Department of Health’s Mind out for Mental Health campaign. In 2003, in response to escalating global conflict, Marina embarked on a very personal project collecting stories in words and pictures from people who had lived through violence, tragedy or inustice and sought forgiveness or reconciliation rather than retaliation or revenge. From this, along with photographer Brian Moody, she created “The F Word” exhibition: a collection of images and personal narratives from around the world exploring forgiveness and understanding in the face of atrocity. The success of the exhibition, which launched in London in 2004, led to Marina founding The Forgiveness Project. She is married and lives in London.

I received a review copy through Jessica Kingsley Publishers and Singing Dragon through Netgalley.