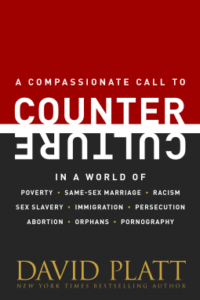 Forget the American dreamlife for Christians. Let go of a focus on evangelism only, or its alternative a strive for justice, religious freedom, end of slavery and racism only. Dare to be honest to yourself, the faith you profess and the people around. In Counter Culture, New York Times bestselling author David Platt dares to open tough conversations on the fuel we put into sexual trafficking by watching porn, the supercial end of racism, when we discriminate on auto-pilot, take lives of unborn children, and promote same-sex marriages. The sojourner in our midst, of which the Bible speaks, is the immigrant next door. And did you ever realize what the command to take up your cross and follow Christ really implies? Will you stay silent? Will the Church leave thousands of ethnic groups unreached by the gospel?

Or will you and your church pick up challenges like spreading the gospel while taking care of orphans, persecuted Christians and poor? Taking the whole Bible seriously is really counter culture, intolerant and radical. Though I would like to have seen chapters on the possession and use of weapons among Americans, the widespread obese and overconsumption  too, this book testifies to a deep love for God and His instructions. Each chapter closes with a short summary of things to pray for, re-read in the Bible and practice. Counterculturebook.com has additional resources, links to organizations and personal stories.

Dr. David Platt, Pastor of The Church at Brook Hills, is deeply devoted to Christ and His Word. David’s first love in ministry is disciple-making—the simple biblical model of multiplying the gospel by sharing the love of Christ, showing the life of Christ, and teaching the Word of Christ in all nations. He has traveled extensively to teach the Bible and church leaders throughout the United States and around the world. Atlanta natives, he and his wife, Heather, made their home in New Orleans until they were displaced by flooding following Hurricane Katrina in 2005. The Lord led them to Birmingham the following year, where they have served The Church at Brook Hills since 2006.

A life-long learner, David has earned two undergraduate and three advanced degrees. He holds a Bachelor of Arts (B.A.) and a Bachelor of Arts in Journalism (A.B.J.) from the University of Georgia, and a Master of Divinity (M.Div.), Master of Theology (Th.M.) and Doctor of Philosophy (Ph.D.) from New Orleans Baptist Theological Seminary. He has previously served at New Orleans Baptist Theological Seminary as Dean of Chapel and Assistant Professor of Expository Preaching and Apologetics, and as Staff Evangelist at Edgewater Baptist Church in New Orleans. He has authored several books, Radical – Taking Back Your Faith from the American Dream, Radical Together – Unleashing the People of God for the Purpose of God, and Follow Me: A Call to Die, A Call to Live. David recently founded Radical, a resource ministry, dedicated to serving the church by making disciples of all nations.

David practices what he preaches through his travel nationally and internationally, teaching from God’s Word in churches, seminaries, the underground church or even under a shade tree in Africa or Latin America.

David and his wife, Heather, live in Birmingham with their four children.