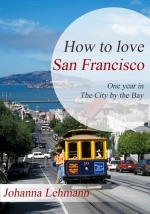 Johanna Lehmann threw in her first-hand experiences of staying in San Francisco to portrait the Bay City through the eyes of the German girl Hanni Bayers. In How to love San Francisco – One year in the City by the Bay, Hanni got the chance to work in San Francisco for a year. After a warm reception by her own colleagues, the book’s not so much on her actual work, as well as the adventures in the city. She galls in love with Nick, an American guy, that isn’t as exclusive as she hoped for. With colleagues Vijay she initiates Healthquest, a start-up and discovers how difficult that practice is. Countless restaurants, bars, museums and parks are visited. The Golden Gate Bridge and Park, the nature reserves north and south of San Francisco, as well as the Stanford University, Silicon Valley are frequented. Housing problems, sports and the amazing parties and exposure of LGBT community in SF. Cultural differences between Germany and the USA, as well as tips for further explortion. It’s all packed in month by month chapters, which read as travelogue, travel guide, fictional love story, chicklit, and self-realization memoir. combined. If you’ve never been to SF before, you definitely want to go there after reading this fresh take on the city.

You can download a free chapter to get a taste of the book.

Johanna Lehmann was Born in Berlin, the creative hub of Germany and growing up with books all around her, Johanna always wanted to become a writer, but her parents – her Dad an engineer and her Mom an English teacher – said “If you want to be a writer you have to: 1.) Read a lot and 2.) travel a lot to.”
Johanna started working on that vision: She studied Business Administration at INSEAD and Catholic University Eichstätt-Ingolstadt and worked for major companies all over the world. After she had read a few hundred books and traveled more than 40 countries in the world, she thought it was time to give the author life a try: She moved to San Francisco, took writing classes at Stanford University and wrote her debut How to love San Francisco – One year in the City by the Bay (2012) in German.
Johanna was a finalist at the Writer’s Institute 2013 and her work was described as “a fresh, somewhat frisky and unusual take on San Francisco” as well as a ” fresh voice.” The English version How to love San Francisco – One year in the City by the Bay was funded through a succesful Indiegogo crowdfunding campaign and will be published soon.

Authorpreneur Johanna Lehmann approached me directly, offered a free review copy of the book in exchange of my personal review.