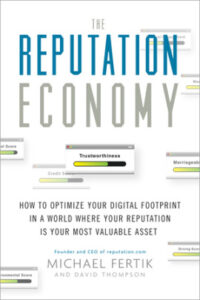 We’re in a new world of reputation, where reputations are made and lost in an instant, where everything you do will be tracked, calculated, measured, and analyzed, and where anyone can find out nearly everything about everything else with just a click. Michael Fertik and David Thompson shed light on The Reputation Economy and tell How to Optimize Your Digital Footprint in a World Where Your Reputation Is Your Most Valuable Asset.

You may try to hide from it, seek to delete your digital footprint or constantly raise concerns on privacy issues. There’s attention spent to that topic in the first part of the book. If you embrace the Reputation Economy, make sure you advertize your unique skills and talents, generate enough fodder for those reputation engines we keep talking about. Learn about Decisions Almost Made by Machines (DAMM), the logic behind dating sites, hiring and search engine ranking. Understand the benefits and flaws of social media influence measurements as in Klout and the way your LinkedIN profile or other social media profiles are perceived by employers and customers.

The wonderful world of reviews on Yelp or Angie’s List, and sharing economy sites like AirBnB or Uber offer chances and pitfalls. This book delves into practices to carefully curate the reputation you have. Own the conversation instead of becoming prey to those spreading hoax rumors.

Michael Fertik is CEO of Reputation.com and one of Silicon Valley’s leading futurists. Credited with pioneering the field of online reputation management (ORM), Fertik is lauded as the world’s leading cyberthinker in digital privacy and reputation.

He is a member of the World Economic Forum Agenda Council on the Future of the Internet and recipient of the World Economic Forum Technology Pioneer 2011 Award. He was named TechAmerica‘s Entrepreneur of the Year in 2012. Fertik is an inventor on multiple US patents. He is a regular industry commentator with guest columns in Harvard Business Review, Reuters, Newsweek, and Inc. He is also co-author of the bestselling book, “Wild West 2.0.” Fertik founded his first Internet company while at Harvard College. He received his JD from Harvard Law School. Michael also writes fiction, which can be found on Amazon.

David Thompson is a practicing lawyer, technical expert, and an attorney at Munger Tolles & Olson LLP. He is the former General Counsel of Reputation.com, Inc.

I received a free advance review copy from publisher Random House through Bloggingforbooks to provide you my review upon reading this book.