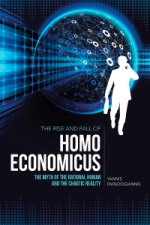 Yannis Papadogiannis, financial journalist is critical towards economists in The Rise and Fall of Homo Economicus: The Myth of the Rational Human and the Chaotic Reality. The economic science failed to predict the recent financial crisis. In the first part of his book the author reveals patterns of crises throughout the ages going unpredicted and neglected by the ‘experts’ until the harm was done. The economists still apply the mythical creature called homo economicus, a fully rational human unaffected by emotions, errors, a kind of perfect person. The science’s  use of mathematics is another barrier for really connecting to the real world outside universities.

The author cites numerous sources that simply denied the possibility of a crisis, or the downfall of an economy, whether it was the Tulip Mania in the 17th century, the 1929 crash or the bankruptcy of Greece a couple of years ago. The science doesn’t count with the financial institutions like banks at all. Recent findings from disciplines such as neuroscience, psychology, and sociology proved the flaws in reasoning and decision making, management of risks and a proper estimation of chances and the effects of undesired outcomes. Emotions, biases, and social and political ideas influence people’s behavior. Unseen by economists and thinkers ranging from Adam Smith, Karl Marx to recent Noble Prize winners in economics is the disruptive nature of technology.

You encounter the ideas of Daniel Kahneman‘s Thinking, Fast & Slow, Chaos Theory, statistician’s who’s attempts to simply were denied by the scientific establishment and only recognized when it was too late. Neoclassic economists, such as Alan Greenspan‘s blind spots are identified. Change is the only certainty. No one can foretell the future. No mathematical formula can capture the multifaceted life or real humans. Another economic calamity is at the doorstep, because humans are still fearful and greedy and unwilling to really learn from past experiences. The Rise and Fall of Homo Economicus is worth reading. A plea for better understanding the inner workings of the human brain, trial and error, banks, and controlling functions of the financial sector.

Yannis Papadogiannis studied economics at the University of Piraeus in Greece. In 1994 he began working for financial magazines and newspapers as a financial journalist. He has been with the Athens newspaper Kathimerini since 1999. Yannis is also the author of The Inglorious End: The Precarious Flight, Crash-landing and Rebirth of Greek Banks (in Greek).