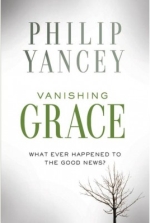 In Vanishing Grace – What Ever Happened to the Good News?, journalist, storyteller and renowned author Philip Yancey, explores the effects of lost appeal of U.S. Evangelicals. Yancey, himself Evangelical and unwilling to give up, had a deep dive in the American post-Christian culture and compared it to the cultural relevance and impact of Christians on other continents. The author puts a huge mirror to his readers. “Why does the church stir up such negative feelings?” What’s so good about the Good News (that’s what Evangelism should be about)? What’s the effect of watering down, mixing Christianity with politics, shouting loud harsh positions on abortion, homosexuality, death penalty, God’s curses through natural disasters, and Islam while being silent on gun proliferation, unpaid leave, voluntary work and nonviolent resistance.

Yancey gathered numerous examples from history, ranging from stopping arena fights in the first centuries after Christianity’s start, Martin Luther King Jr.’s inspiration from Mahatma Gandhi‘s marches throughout India, silent churches and outspoken people like Dietrich Bonhoeffer, etc. Yancey’s What’s So Amazing about Grace? (2002) landmark book is still valid, where genuine believers share not only words, but also practice what they preach. The author himself often is ashamed to have only words to share, where others go the extra mile for others, spreading the Good News.

In societies fed up with superficial Christians, and religious outlets from New Age, Hinduism and Buddhism to Islam, as well as agnosticism and modern mixes of all of the above, respect, influence, and reputation in a newly post-Christian culture is something difficult to regain. Vanishing Grace makes you think on your faith and its relevance to neighbors, friends and family.

Philip Yancey serves as editor-at-large for Christianity Today magazine. He has written thirteen Gold Medallion Award-winning books and won two ECPA Book of the Year awards for What’s So Amazing About Grace? and The Jesus I Never Knew. Four of his books have sold over one million copies. Yancey lives with his wife in Colorado.

I received a copy of Vanishing Grace: What Ever Happened to the Good News? from NetGalley for the purpose of generating a review.