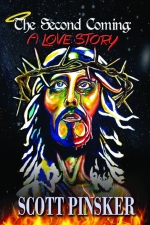 I was invited by Scott Pinsker to read and review his new thriller, The Second Coming: A Love Story. “I don’t know if it’s your cup of tea, but it does touch on a number of issues that you are interested in: business, marketing, God, Jesus, morality, activating an audience, PR, etc.” Where Jews expect their Messiah, and Christians belief He actually came 2,000 years ago, but will return, this Second Coming is placed in apocalyptic times and circumstances. If you’ve ever imagined how you and others, living in the here and now, would react if someone would claim to be the Christ, this book takes a zigzag through modern age American points of view when not one, but two people, Joe and Israel claim to be Jesus Christ. And the other of course is labeled Adversary or Satan in disguise.

A hilarious, over-the-top tour along politics, ideologies, world religions, biblical names and characters hell or heaven bound culminate in a television debate to win souls. While the book’s not meant to explain theology or will end up in a Christian bookstore, I could see the humour despite the many ‘expressions of strong language’. If you want to gain world power, what’s your marketing plan? Will you use intellectual arguments, a well-thought theology, a beautiful woman as side-kick, miracles and tricks? And is your truth really the truth, or is a supernatural plot being unfolded without explanation? What if a Grand Love Story is the real cause of humanity’s twofold nature, both good and evil? The Second Coming will keep you engaged fo(u)r hours!

And here we go again, Der Untergang scene with an angry Hitler is abused for a book announcement:

A nationally-recognized marketing expert, Scott Pinsker has worked with a vast array of sports stars, Grammy-winners and entertainment icons, managing everything from crisis communications to film properties.  His analysis of publicity trends has been showcased multiple times on FOXNews.com, where he occasionally contributes as a marketing expert. Pinsker developed the concept for The Second Coming: A Love Story almost 15 years ago, while attending law school in Washington, DC. cott Pinsker lives in Tampa Bay, Florida, with his wife, two young boys, and his 220-pound mastiff. This is his first novel, and it’s the first in a trilogy. The follow-up, Three Days Later: A Revenge Story, will be released in early 2015.

Read an interview with the author on the featheredquillblog and visit secondcomingishere for much more on the book.