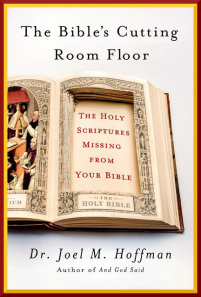 The Bible you usually read is not the complete story. Depending on your denomination you may have only so-called canonical books, deuterocanonical books, apocryphia and/or other books, letters and stories. Rather than using the fact that what we call ‘Bible’ is an outcome of (un)intentionally cut & paste to ‘proof’ the unreliability of the Bible, like Bart Ehrman c.s. do, Dr. Joel M. Hoffman shares in The Bible’s Cutting Room Floor first the backgrounds of bookmaking technology. With the discovery of the Dead Sea Scrolls, Nag Hammadi writings, the Books of Enoch, Life of Adam and Eve, extensions to Esther and Daniel, and Josephus history and commentaries commentaries on the Scriptures, much more teachings and insights have become available.

Hoffman both takes his reader along the peculiar way the Dead Sea Scrolls were found, traded, researched and ultimately published. He elaborates in depth the way Josephus treats Old Testament texts, how the Septuagint, Vulgate and King James Version were created, and how difficult it is to translate Old Testament Hebrew and Aramaic. What do and don’t we know of the Essenes or Qumran Sect that hid the Dead Sea Scrolls. After that there’s room to you explore what you missed in the ‘modern’ Bibles. What happened to Adam and Eve after they were kicked out of the Garden of Eden? What was Abraham’s youth like? Do we know more of Enoch’s endless life? What’s the roles of the Tower of Babel? And do the different biblical positions on fundamental, universal questions like good versus evil, human suffering and afterlife, angels, and God’s holiness have support in these extra-biblical writings?

Hoffman’s teaching respectfully with an impressive mix of history, linguistics, and religious scholarship. It may bring believers and unbelievers together, confirming the faithful, both Jews and Christians, answering pregnant questions and challenge the ones currently rejecting the Bible as mere fiction. Hoffman makes you curious to re-read certain Bible parts and read his sources for yourself.

Dr. Joel M. Hoffman, an expert in translation, Hebrew, and the Bible, is known for his “fresh insights and interpretations about religious life in the 21st century.” A popular speaker, Dr. Hoffman presents to churches, synagogues, community groups, and university audiences across the world. He holds a Ph.D. in linguistics and has served on the faculties of Brandeis University and Hebrew Union College.

Dr. Hoffman is the chief translator for the popular 10-volume series, My People’s Prayer Book (winner of the National Jewish Book Award) and for My People’s Passover Haggadah. He is the author of the critically acclaimed In the Beginning: A Short History of the Hebrew Language (NYU Press), and, most recently, And God Said: How Translations Conceal the Bible’s Original Meaning (Thomas Dunne Books/St. Martin’s Press), which explores how translation mistakes mask the original meaning of the Bible.

Dr. Hoffman lives in Westchester, NY. He blogs at goddidntsaythat.com and is @joelmhoffman on Twitter. The online companion to the book: www.thebiblescuttingroomfloor.com, and the complement www.theunabridgedbible.com.