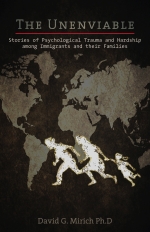 In The Unenviable Dr. David Mirich has compiled his experience working with immigrants seeking permission to stay in the United States of America. His psychiatric reports of real people show both professionalism and compassion. Through interviews he unveiled the misunderstood backgrounds, cruelties suffered in both the native countries as well as America. This plethora of men and women are categorized in the difficulties that remittance of undocumented family members would generate. Children without their parents, spouses living separately, pregnant questions on who will work, earn money and pay the rent. Next is a group immigrants that once arrived in America got stigmatized, exploited and bullied by their ‘guests’. Modern mail order brides discover that drugs, alcohol and other addictions cause their Prince Charming is dominating, imprisoning and mean. Traumas guerillas in other American countries mark fellow human people, ultimately fleeing to the U.S. There are so many cruelties, Catch 22 situations, mental disorders, and conditioned, immobilized people in this book, that the stories are overwhelming and not suitable for a sequential single read.

The book’s important message is the duty to do justice, listen to people’s stories beyond the superficial “I’m fine, thanks” introduction. Anyone thinking that civilized societies, built on immigrants, treat new immigrants as they would want to be treated themselves, should really read The Unenviable and think twice.

David Mirich used to introduce himself by saying, “I am the recovering son of a psychologist, and I hope you like me anyway.” He has long been fascinated by the study of human behavior, particularly as it relates to spirituality. Some of his heroes in this area of “depth psychology” are Thomas Moore and the recently deceased James Hillman. Mirich is captivated by archetypal psychology and have whiled away a lot of hours reading about mythology as it relates to societal and spiritual development. Collectors also fascinate him, as he collects and restores 1960s Pontiacs, and anything about the Beach Boys. He also loves to ski and feels so fortunate to live near some of the world’s premier resorts. He also flies gliders and every Thursday afternoon.
Most of all though, he loves love writing. For years he wrote many, many hundreds of in-depth psychological evaluations and am enthralled with revealing the person within. In recent years he has begun to write about other topics that interest him, including his work with immigrants, many of whom have applied for amnesty. I has also done a good deal of writing about the BDSM community, having become interested in them after he conducted a large-scale psychological study several years ago. He hopes to publish many more books about these and other subjects that fascinate him.

I received an Advance Review Copy of this book from Sakura Publishing via the LibraryThing Early Reviewer programme in exchange for my honest review.