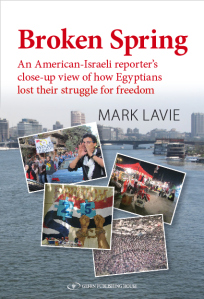 The Arab Spring (at least that was the perception some years ago) in countries as Libya or Egypt, dominated newspapers’ front pages for only a limited time. Today’s newspaper will wrap tomorrow’s fish. Mark Lavie takes his readers to his second homeland, Egypt, where he stayed in Cairo and Alexandria during the past four years. In Broken Spring: An American-Israeli Reporter’s Close-Up View of How Egyptians Lost Their Struggle for Freedom he shares his and Egyptians’ tragic stories, real-life encounters and photographs of demonstrations, the Egyptian economy, fuel prices and wheat subsidies. He busts myhts on religious influences, Muslim Brotherhood, traffic in Cairo. He tells how he is bargaining, or visits the Gizeh pyramids. As country having a peace treaty with Israel, conflicts over Nile water with Ethiopia, strong economic ties with Turkey, and an almost disappeared Jewish life in the large cities, there’s a lot to tell, that not has been featured in the newspapers. Broken Spring is a trip down memory lane: broken promises of democracy, false hopes for freedom of press, inadequacy of United Nations Human Rights statements, local polls and solutions for both a Palestinian State as well as Israel. Short chapters, well-written, humor included. Recommended for readers wishing to learn more of the backgrounds of the current state of affairs in Egypt and the Middle East.

Mark Lavie is an American-Israeli journalist who has been covering the Middle East since 1972. For most of his career, he was based in Jerusalem and Tel Aviv. He served as radio broadcaster, print wire reporter and editor for the Associated Press, and broadcast for radio networks including NPR, NBC and CBC. He has covered conflicts, starting with the 1973 Yom Kippur Mideast war, and peace efforts like the Israeli-Palestinian partial peace accords, for which he won the prestigious Lowell Thomas Award for Best Radio Interpretation of Foreign Affairs. After reporting on two Palestinian uprisings in the West Bank and Gaza Strip, Lavie transferred to Egypt on a two-year assignment in 2011, in time for all the major events of Arab Spring.