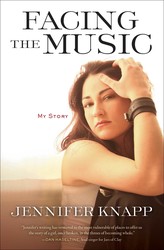 Reading the story of Jennifer Knapp gives the reader an inside out view on the harm fellow Christians do towards LBGT people. Contemporary Christian Music (CCM) is positioned as parallel universe to regular, secular music. Its clean cut subculture stresses purity and perfect role models, a standard difficult to reach or maintain without going through the motions or falling out of human grace. It was what Jennifer Knapp after a difficult youth, a remarkable musical upbringing and discovery of her muse and a sudden rise as Christian rock chick caused her to call it her quits in 2002 after successful albums and an intensive tour schedule. Once off the radar there were gossips about forced withdrawal, a sinful life as single possible cause.

In Facing the Music Knapp tells her is her story of finding Jesus in the midst of a wild youth of navigating school heavily influenced of alcohol and promiscuity. Her years of celibacy and devotion to sing Jesus songs, getting signed by TobyMac‘s Gotee Records, the condemnation of her appearance at the Lilith Fair concerts, her discovery of being gay and avoidance of having to disclose her sexual orientation to her roadie, even to close friends and mentors. She found herself babysitting (both professionally as practically) to the then 17 years old Katy Hudson, pushed to the Christian music scene by her parents. Knapp quit CCM and promised never to play and sing anymore. Jennifer’s travels through the US and Europe led her ultimately to Australia, where she and her partner Karen settled, still trying not to be recognized as that Jennifer Knapp.

Step by step she learned to accept herself and to value her talents. Inspired by both a local pastor and the 2008 hit I Kissed a Girl by Katy Perry (yes, the same Katy Hudson, who took another stage name and sent quite a different message than during her CCM years nearly a decade before as teenager), she took a bold step and started writing music again. IN 2009, she returned to Nashville again in preparation of what would become the Letting Go album. A public coming out to both Christian and secular press was planned. The resulting storm of reactions was no surprise, but did harm Knapp’s well-being again. Years of absence and silence, reluctance to ever visit a church again and yet a faith that was so strong, that Knapp was convinced that she couldn’t relinquish that part of her personality just as being lesbian. Despite the theologically sound arguments, traditions and convictions, she maintains she is both gay and a Christian. A human being looking for love and to give love away. Knapp’s journey’s for which she is responsible is not over. She gave up once, but can’t imagine doing it again. Her latest album Set Me Free testifies to that. An inspiring memoir that made me feel ashamed and yet again willing to choose to love my neighbor.

About the author
Jennifer Knapp is a highly acclaimed singer-songwriter who got her star in Christian Contemporary Music (CCM). Knapp exited CCM in 2002 at the height of her professional music career and seemed to disappear. On her return in 2010, she publicly confirmed that she was gay. Today, she performs and tours extensively and actively engages in advocacy work alongside religious communities and leaders that seek to create an open and affirming spiritual home for lesbian, gay, bisexual, and transgender people of faith.

I received a free review copy from the publisher Simon & Schuster through Netgalley without the obligation to write a positive review. The opinion on this book after reading it 100% is my own.