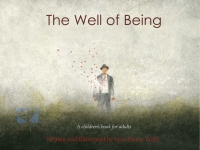 The Well of Being is an richly illustrated pursuit of happiness, the well of being, the source of well-being. The One that created the universe is forgotten by many and needs to be found again. Weill paints the scenes from creation, the fall of mankind and its consequences. There’s hope as well to renew inner wellness and truly live life as it is meant to be. The hassidic Jewish teachings/interpretations provide a consistent and guiding base of reference throughout the book. Though the phrases on each page you might get the impression of a children’s book. Nevertheless the philosophical questions are for adults only. Every layer (children’s book, fine art collection, philosophy) has its own truth and that is part of the book’s authentic character.

Jean-Pierre Weill was born in 1954 to Luce Weill, a writer and teacher of literature,from Normandy, France and to Arthur Klein, an American soldier turned actor, from Carbondale, Pennsylvania. The family moved from Paris to New York, where he was raised with his three sisters. Weill attended St. John’s College, in Annapolis, MD (1972- 1976). He joined Spoken Arts, Inc., a pioneering family recording company, dedicated to producing an audio library of the leading English language writers and poets of the 20th Century reading from their own works.

While dabbling in the visual art, Weill created a uniquely expressive mode of painting and drawing in 3-dimensional space. He calls his multiple level glass paintings Vitreographs™. His work has sold in hundreds of galleries and museum outlets throughout the U.S., Europe, and Japan. He has designed original and limited-edition vitreographs for Disney Art Editions, Inc., Warner Bros Co., and Coca-Cola, Inc..

Weill has recently written The Well of Being. His first book, it is an illustrated inquiry about our journey to adulthood. He lives in Baltimore MD with his wife, Rachel Rotenberg, a sculptor. They have five children.