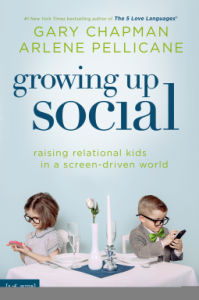 Restricting your tech savvy children these days in their online time isn’t popular. Just as tricky as the previous generation parents wrestled with whether or not granting a television in each bed room to avoid arguments in the living room. In Growing Up Social Gary D. Chapman & Arlene Pellicane address the effects of ever more ‘screen time’ for children (and parents). While technology brought us many goods (work and shop from home, contacting people wherever they reside, outsourcing), on establishing and maintaining social relationships the authors see a lot of bad influences. Five skills that are elaborated are affection, appreciation, anger management, apology and attention. Learn to equip your child to be relationally rich in a digital world, replace mindless screen time with meaningful family time and establish boundaries. Combined with applying relevant love languages (Gary Chapman wrote The Five Love Languages in 1995), your family will be more social and coherent. Once and again the authors warn you not to condemn other parents or to expect the world to change for you. You can make a difference in your own (extended) family. The bad side of screen time is emphasized too much in my opinion. A shorter version of the book could have the same powerful message: protect your family time and don’t let screens in whatever format rule your world.

Dr. Gary D. Chapman is a seasoned pastor and marriage counselor. It led him to publish his first book in the Love Language series, The Five Love Languages: How to Express Heartfelt Commitment to Your Mate. Many of the millions of readers credit this continual New York Times bestseller with saving their marriages by showing them simple and practical ways to communicate love. Since the success of his first book, Dr. Chapman has expanded his Five Love Languages series with special editions that reach out specifically to singles, men, and parents of teens and young children.

He is the author of numerous other books published by Moody Publishers/Northfield Publishing, including Anger, The Family You’ve Always Wanted, The Marriage You’ve Always Wanted, Desperate Marriages, God Speaks Your Love Language, How to Really Love Your Adult Child, and Hope for the Separated. With Dr. Jennifer Thomas, he co-authored The Five Languages of Apology. Dr. Chapman speaks to thousands of couples nationwide through his weekend marriage conferences. He hosts a nationally syndicated radio program, A Love Language Minute, and a Saturday morning program, Building Relationships with Dr. Gary Chapman, both airing on more than 400 stations. Dr. Chapman and his wife have two grown children and currently live in Winston-Salem, North Carolina, where he serves as senior associate pastor at Calvary Baptist Church.

Dr. Chapman holds BA and MA degrees in anthropology from Wheaton College and Wake Forest University, respectively, MRE and PhD degrees from Southwestern Baptist Theological Seminary, and has completed postgraduate work at the University of North Carolina and Duke University.

Arlene Pellicane loves to encourage women and strengthen families through her writing and speaking. Author of 31 Days to a Happy Husband and 31 Days to a Younger You, she believes that anyone can experience positive life change! Readers love Arlene’s upbeat personality and authenticity. Arlene has appeared on national television and radio programs such as The 700 Club and Turning Point with Dr. David Jeremiah. Arlene and her happy husband James live in San Diego with their three children.