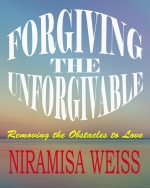 As sequel to The Liar, Niramisa Weiss elaborates of the destructing power of the liar in our human mind. If God were real, we ask, how could He let these terrible things happen to the innocent? Weiss leaves God and devil as human constructs, and chooses to find out why God has nothing to do with any of it, regardless of whether He exists or not. Just like with The Liar, Forgiving The Unforgivable leads to a ‘liar’ with a personality, will and power, but nameless and apparently detached from a religion or theology. Core message of the book: know your enemy, understand his powers and effects on mankind. Once you see the liar’s influences that cause alcohol and drug abuse, greed and narcism, Nazi beliefs and the Israel-Palestinian conflict, to pick some of the many ‘unforgivables’ in this book, you’ll learn that forgiveness is the only key to love one another and make this world a better place to live in. Weiss despises organized religion, denounces violence by Buddhist monks in Thailand. Weiss says she’s speaking by ‘Spirit’ without disclosing its source. And though I recognize many of the biblical descriptions of the devil’s nature and workings (a liar since the beginning), you will not find any Bible quote, or quote from another named holy book in this book. But stay alert of what’s not been said. Together, we will discard everything obstructing our awareness of love. Together, we will forgive the unforgivable. Collective healing would be our mission. I don’t think that we will ever be able to do that by ourselves. That’s exactly was we need to give in to God, receive His grace, dismantle sin’s effects and defend ourselves to the devil’s attacks on our minds. Weiss deploys an abundance of words, sometimes I skipped through the pages, because chapter after chapter the same message is repeated. OK, a bullet list would be the other end of the stylish spectrum. However, the book may help you to identify false arguments and destructive powers in your own life, which may seem unforgivable as well.

Niramisa Weiss lives in London and devotes her life to the Plan as described in A Course In Miracles, Niramisa works tirelessly to play her part in the inevitable healing of the diseased mind of humanity. She understands that what she has uncovered of our species-wide, perceptual pathology will often be met with anger and resentment, at first. Nonetheless, she continues on fearlessly with the work she has been assigned by Spirit. She reveals her spiritual roots as Patanjali Yoga Sutras (Hinduism), El Zohar (Kabbalah), and Divine Horsemen (Haitian voodoo).