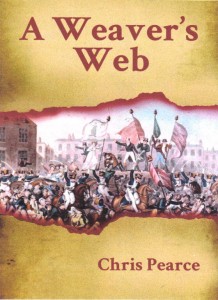 A Weaver’s Web is historical fiction set in the early 19th century Manchester and rural surroundings. Hand loom weaver Henry Wakefield, his wife Sarah and their growing family (up to five children) live in poverty, stick to old customs. When their mill is sold, the family moves to Manchester to work in local factories. It’s the start of the Industrial Revolution. Entropy sets in when organized protests don’t bring the promised revolution, one son runs away and ends up in New South Wales (now known as Australia). Lies, gambling and drinking don’t bring happiness or economic progression. Naturalism rules in this novel. Personalities can be related to, despised or wished more luck. A lunatic asylum for Sarah after losing a young baby. Henry Wakefield slowly climbs the social ladder and ends up as an aristocrat, the class he had always despised for treating humans like animals and organize slavery. Now he deploys slaves and orphans himself, still hiding away from transparency and honesty. The book works towards a climax in which family ties are tested to the utmost. Will revenge or love have the final word? A beautifully woven story!

Chris Pearce was born in Surrey, UK in 1952, and grew up in Melbourne, Australia. He has qualifications in economics, management/marketing and writing/editing. He worked as a public servant (federal and state) for 25 years and in the real world for 12.5 years. His inspiration for writing A Weaver’s Web was a postgraduate creative writing course he topped from 30 students in the mid 1990s. After unsuccessfully targeting many literary agents, including one who compared his manuscript to John Steinbeck’s The Grapes of Wrath, he decided to publish it as an ebook. He also has a non-fiction book (print only), Through the Eyes of Thomas Pamphlett: Convict and Castaway, which he plans to publish as an ebook later in 2014. He is writing a book on the history of daylight saving time and has some notes towards a novel set 80 years into the future. His other hobbies include family history and tenpin bowling. Chris and his wife live in Brisbane, Australia.