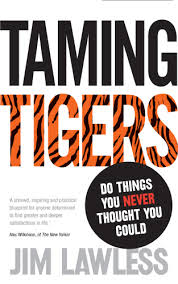 You’re writing your life story. Yesterday’s history, tomorrow’s imagination. Here and now really counts. And just dreaming will not take you anywhere. Get out of your comfort zone, face your Tigers and tame them. Don’t let them write your life story, but take back control. Taming Tigers is not a typical self-help book for instant success. Jim Lawless is not a motivational speaker, but practiced his lessons himself. He won a bet to learn ride a horse like a real jockey and compete in a televised race within 12 months. And he became the first British free diver to descent to 101 meters below surface in a single breathe. Taming Tigers is the antidote to ‘self-help’ and a highly practical approach to overcoming fear. It’s like Pi learning to live with the tiger on a boat in Yann Martel‘s best seller The Life of Pi. Do things you never thought you could by applying 10 rules that are based on a mixture of Stephen Covey personal mission statement and habits of effective people, Daniel Pink‘s thoughts on motivation, Maslow’s pyramid of needs, time management and overcoming procrastination and fears blocking you from getting where you wanted.

Lawless is constantly challenging his readers to put down the book and getting into action. On his website tamingtigers.com he offers accompanying movies. And in the book several friends and course participants share their testimonials about how the 10 Rules really worked. Whether it’s daring to emigrate to Australia, start a new business or revive the company you’re working for. Again, no instant success promised, discipline and excel in basics make up of of the rules. Enough said: meet your tigers and learn that they don’t have teeth.

Jim Lawless is one of the world’s leading inspirational speakers. Over half a million people on five continents have been entertained and inspired by Jim’s presentations and many more by his bestselling book Taming Tigers (Random House).
As CEO of The Velocity Corporation, Jim has advised companies globally on creating organisational Cultural Change and elite teams. With his team, has implemented successful change programmes in companies including Apple, Barclaycard, Atos, Axa, BT, Aramark, Skrill Group and Badminton England.
He insists on testing principles of change on himself before advising others. In August 2010, he used “Taming Tigers” to become Britain’s Deepest Freediver, the first Briton to dive below the magic 100m barrier on a single breath of air.
In 2003, in response to an audience challenge, he proved Taming Tigers by becoming a televised jockey in 12 months. At the outset he was 3 stone (20kg) too heavy and could not ride a horse. He won the bet.
These adventures – and the lessons he learned – bring him and his methodology immediate and high credibility with audiences on all continents.
Jim holds a Bachelor of Laws degree and qualified as a solicitor in 1994. He was elected a fellow of the Royal Society for the Arts in 2008 in recognition of his business writing and is the author of the book ‘Taming Tigers’ (Virgin/Random House).
Jim practiced commercial law in the City of London and in a major IT company before founding The Velocity Corporation (then called “Optimise”) in 1999.