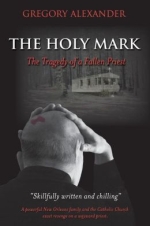 We all have our opinions of the scandals that haunted the Roman Catholic Church in the past decennia. Gregory Alexander tells a story from within the Church. In The Holy Mark. he introduces his readers to Louisiana based Father Tony Miggliore, the protagonist of the novel. At what seems an Italian family saga at first sight, a son’s upbringing, coming of age and calling to be a Catholic priest, shows already some psychologically twists. Exposure to and engagement with boys is passion in more than one sense.

To mark his Silver Jubilee as a priest, Tony reflects on his life, his highs and lows, and amazement over the role his subcutaneous blood spot played. Not a blood stained window, but an intimate recount of twenty-five years in the Church, spanning 1970-1995. Strong family ties, power, church politics and revenge mark The Holy Mark. Skilfully written, and engaging until the very last page!

Gregory Alexander was born in New Orleans. Except for a brief few years in his early childhood when his father was stationed in San Diego with the Coast Guard, he has lived there all his life. When his family returned to New Orleans, they lived for a while with Greg’s maternal grandmother, Josephine Quaglino Foley, in half of a double off of Magazine Street in the Irish Channel, near the shop where his grandmother cut hair. The Channel is featured prominently in The Holy Mark as the site of “The Den,” the boarding house for needy high school boys.After attending a Catholic high school for boys, Greg entered the University of New Orleans and eventually earned an undergraduate degree in Psychology and a Masters in English with a concentration on American Literature. He taught for twelve years, predominantly at Cabrini and Jesuit, two prominent New Orleans Catholic high schools. At Cabrini, Greg worked with the Missionary Sisters of the Sacred Heart, who make a cameo appearance early in Chapter 7 of the novel.

While teaching, Greg began writing short fiction and submitting his stories to literary magazines across the country. After 168 rejections (“Yes, I counted them,” Greg laughs today), his first acceptance came for “The First Lady Barber in New Orleans,” a fine sketch of Greg’s grandmother Josephine, who was actually the second lady barber in the city. (Family lore claims that her cousin was the first!) The story appeared in the fall 1995 issue of ELM (Eureka Literary Magazine), Ronald Reagan’s alma mater in Illinois.

Over a dozen publications followed over the next decade, including “The Holy Mark,” the 6500-word genesis of Greg’s novel. The story was published in the Lullwater Review at Emory University in Atlanta. After seeing the story published, Greg determined to expand it into a full-length novel. After a year of research and two years of writing, the first draft of The Holy Mark was complete.

Greg left teaching behind in 1998 to take a training job in local government Human Resources. He is now a certified Human Resource Professional. In 2011 he and a good friend, the poet and flamenco artist/choreographer Charlene Roger, made their first trip to Rome, where Greg was able to see many of the sights that Father Tony was denied in the novel!