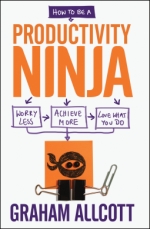 Many books are written and courses are given about time management. Graham Allcott wants to go beyond that and learn you how to think and act like a Productivity Ninja. Allcott merges Getting Things Done (David Allen), The Seven Habits of Highly Effective People (Stephen Covey), The War of Art (Stephen Pressfield), Meeting Together (Lois Graessle, George Gawlinski, Martin Farrell), Linchpin (Seth Godin) into his own practice, worth sharing. In the age of knowledge work and a neverending stream of information inputs you have to make smart choices. Think of Clay Johnson’s Information Diet as a starter.

Graham Allcott learned it the hard way. After writing and teaching these principles over and over again, he discovered how much his own productivity could be improved. Still room to improve left. He doesn’t want to be imaged as some kind of guru. So, don’t focus on some of his jargon like mindfulness, inbox zero, stealth and camouflage, or zen-like calm. Unlike other time management the aim is not just to show how much more you can do in any given time, but to stay calm and in control. That’s where e.g. the review moments of Getting Things Done (GTD) are so important. Attention management is one of the key features in this book. Avoid distractions, schedule time to act on the really important tasks, begin with the least attractive or most difficult ones to avoid procrastination. Worry less, achieve more and love what you do.

Learn how CORD (Capture & Collect, Organize, Review and Do) as new habits set can help. Perform the exercises provided at the end of each chapter. Reconsider the use of email, calendar, task and note applications. Let this all work for you instead of getting imprisoned by the requests of others. Maybe it’s good to apply the stealth techniques for a while, learn some lifehacks or to spend that first hours to collect all your to-do lists and ‘projects’ in a single ‘system’ to start all over. I enjoyed to see so much known principles and practices collected here, offering me fresh insights as well.

Graham Allcott is a productivity trainer, social entrepreneur and founder of Think Productive. This organization runs public workshops throughout the UK and also run in-house workshops for staff at a diverse range of organizations including the Cabinet Office (UK government), The National Trust, eBay, Heineken, BT, GlaxoSmithKline and the University of Bristol.  Before that Graham’s career has been primarily in the charity sector and focused on social action. He ran community volunteering projects for the University of Birmingham before becoming Chief Executive of the charity Student Volunteering England and then setting up his social enterprise consultancy, Fruitful Consulting.

He was also co-founder of Intervol, the founding Chairman of READ International and has advised Governments, both red and blue, on youth and community issues, most notably the Russell Commission and National Citizen Service. He is a trustee of the youth homelessness charity Centrepoint. Despite an intolerance of failure elsewhere in his life, he is an Aston Villa season ticket holder. Graham lives in Brighton, UK.

A free sample, consisting of the first 42 pages of the book is available through Amazon.

I got a review copy of this book from IconBooks through Netgalley to provide you my impressions.