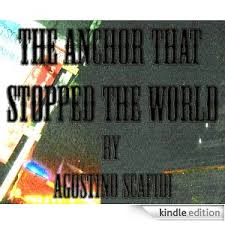 Meet Martin Rizzo who wakes up in an unfamiliar house, taken captive, drugged, purse and other personal belongings stolen. He manages to escape, but trigger a fast-paced hunting game to go after his attackers, and vice versa. Find youself in the cruelties of the Montréal criminal scenes. You will not find real character development, multi-layered storylines, or a hidden plot in The Anchor That Stopped The World. It’s a straightforward race for survival. The booklet is not intended for younger audiences due to a lot of bad language and explicit description of cruelties.

Agostino Scafidi is an author, a guitar player and amateur photographer who was born and raised in Montreal, QC of Sicilian descent. As soon as he learned to write he began writing stories for fun. Also at a young age he received his first guitar, a nylon stringed classical guitar. His child’s curiosity would keep him interested in playing from then on and at the age of 14 he bought his first electric guitar. Agostino also began exploring the world of photography around that time and his interest never died. In August of 2013 Agostino independently published his first novel The Anchor That Stopped The World in eBook format.