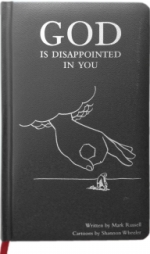 For a lot of people the Bible is God’s word, in fact it’s the source for 3 world religions (Judaism, Christianity, Islam). If you don’t read periodically in the Bible, it may take years to get from Genesis to Revelation. Sure you’ll miss details or the greater story in there. Those with Sunday School cherry picking from the Bible, will surely miss cruel scenes, sexual themes, lists of songs and commandments, genealogies and complete letters. Mark Russell went through the Bible during 3 years to condense every single Bible book in 3 paragraphs to a maximum of a few pages. God Is Disappointed in You is stripped of its archaic language, poetry, genealogy, and law. It may sound offensive at times, highlight sinful people or the harsh approach Paul takes in his letters. Russell labels it Irreverent yet faithful.

It’s admirable to see the core message of the Torah or large prophetic books like Isaiah and Jeremiah being condensed. Cartoons were provided by Shannon Wheeler, award-winning cartoonist for the New Yorker and the creator of Too Much Coffee Man. I found 1 serious error in a letter heading: Paul’s 2nd Letter to Titus (it should have been Paul’s Letter to Titus). To give you an impression of Russel’s style, here’s the core of 1 Corinthians: “Speaking in tongues is cool, but make sure it’s really God that’s speaking through you. Don’t fake it. When you celebrate the Lord’s Supper, or have a love feast, it needs to be a potluck and not a brown bag.” Here’s a part of the end of Luke: “As he slowly bled to death, it seemed like the whole world had gathered to ridicule Jesus. As he hung there dying, they beat and mocked Jesus for being so naive as to waste his time on pathetic and misguided ideas like forgiveness. For which he forgave them.” And finally I’ve got a section from Jonah for you: “The Assyrians didn’t try to kill him. They didn’t even laugh at him. To his shock, the entire city fell flat on their faces and began praying for forgiveness. The king ordered everyone to roll around in the dirt and wear sackcloth as a sign of their humility. They even dressed their animals up in cute little sackcloth outfits. “That’s right,” Jonah said, smug with power, “you should be afraid!””

Mark Russell lives in Portland, Oregon, where he writes and occasionally draws cartoons. His work has previously appeared in McSweeney’s, Bear Deluxe, Unshod Quills, Blog of the Damned, and several now-defunct magazines. Follow Mark Russell @Manruss. His website is www.freemarkrussell.com.

Shannon Wheeler is the creator of the comic book and opera Too Much Coffee Man. A variety of publications have run his weekly comic and single panel gag cartoons including The New Yorker and The Onion. Wheeler currently lives in Portland, Oregon, with his cats, chickens, bees, girlfriend, and children. He has multiple books that are easy to find. Follow Shannon Wheeler @MuchCoffee. His website is www.TMCM.com.