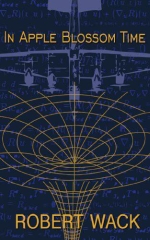 Robert Wack reached the rank of Major in the Army and is a practising pediatrician in the Washington area. For In Apple Blossom Time he tells the story of one of the time travel and Einstein’s Theory of Relativity pioneers, the Dutch Dr. Willem Jacob van Stockum. Van Stockum, a brilliant University of Maryland mathematics professor, can’t ignore American indifference about the war in Europe and the cruelties the nazis committed towards his relatives in The Netherlands. He leaves University and via Canada he becomes a bomber pilot in the British Royal Air Force.

The first part has a really slow pace. The growing failure rate of flight missions. It’s like you’re waiting for Van Stockum to go down somewhere in continental Europe. While supporting the D-Day invasion of Europe, his plane is shot down behind the lines over Normandy and he is rescued by stranded American paratroopers. Hour by hour goes by, when small groups of soldiers try to avoid contact with the Germans, seek shelter and stumble intro French Resistance fighters and strangers. Willem’s ideas and encounters with Einstein are mixed into the storyline. Though Wack had tens of sources available, it’s amazing how poor the Dutch, German and French phrases and curses are. Movies with Germans talking English fluently are fake, but these ‘authentic’ elements prove to be false too. I missed the thrill of the troopers maybe due to the overwhelming details, extensive dialogues and alternating protagonists.

Dr. Robert Paul Wack MD is a male Pediatrician, has 19 years of experience and practices in Pediatrics. Robert Wack lives in Westminster. This is his second novel.