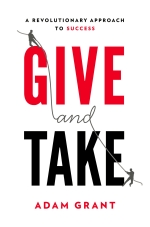 There are a lot of books on success. Normally we associate success, whether it’s professional or in business, with talent, hard work (often as a result of a nature-or-nurture argument) and luck. To elaborate further and prove Stephen Covey‘s inventory of habits to become interdependent, professor Adam Grant did a lot of research on the effect of collaboration to be successful in his book Give and Take: A Revolutionary Approach to Success. Human interactions may be characterized as takers, givers and the in-between: matchers (the ones truly devoted to reciprocity).

Surprisingly givers end up last, because their behaviors suffer huge personal costs. Most successful are….not the takers, nor the matchers, but the givers as well! Grant takes evidence from medicine schools and sales staff to prove that.

To build a culture of giving, it’s important to get the right people on the bus (thanks to Jim Collins for his Good to Great book). But, Collins also taught to get the wrong people off the bus. Takers may be fakers. They will give the impression to be a giver, but only take away. Think of typical taker behavior like kiss up and kick down in the organization’s hierarchy. Matchers will match their behaviours to others. So, if givers are actively giving, also matchers will give more.

Practice (think of the 10,000 hours to master anything, according to Malcolm Gladwell). Giving has to be reinforced, promoted, rewarded. Think of modern peer bonus programs. Kudos or Klout scores given by friends and followers. Help-seeking needs to be encouraged, because a request for help gives an opportunity to give or share. And, leverage your network. Actions speak louder than words and think of powerful references. Don’t limit yourself to your strong ties, but do use the weak ties and dormant ties, because these people did learn different things than your inner circle, and might be the ones with original, innovating answers to your request. Takers won’t get access to these connections (because their fame will keep doors closed).

Grant demystifies psychological and sociological behaviors like projection. So, instead of “what would you do?”, “what would you think others would do?” reveals more of your own beliefs and paradigms. Nice people aren’t necessarily the helping ones. Think of the power of “5 minute favors”: costing you little time, but really helping others out. There’s a bunch of self-tests and background information available at http://www.giveandtake.com.