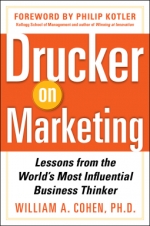 William A. Cohen did a fantastic job compiling the wisdom Peter Drucker (1909-2005) has shared in his many books on the field on marketing. Though Drucker himself didn’t write even one book specifcally on marketing, he has several provoking ideas, that even in 2013 may redefine this concept. Drucker’s claim that marketing and innovation, not finance, production or other function are the core of each business and the two real drivers for continuity of the enterprise. Drucker’s current client focus is fundamental in marketing, very different from popular association with promotion, only one of the four well-known p’s in the “marketing mix”. Drucker discusses whether these are strategic, tactical or operational variables.  And Drucker shows how interrelated marketing and leadership principles are.

Cohen, a former student at Drucker’s college, serves all these lessons in 5 themes: The Ascendancy of Marketing, Innovation and Entrepreneurship, Drucker’s Marketing Strategy, New Product and Service Introduction and Drucker’s Unique Marketing Insights. By doing so, several principles and examples from real business are repeated in one or more other themes. For Drucker, (short term) profitability should not be the main focus of a business, the customer and the market should be. I agree, Drucker on Marketing is an essential read for both current marketing professionals and fans of Peter Drucker.

William A. Cohen, a retired Air Force major general, has written two previous books on Drucker. He was the first graduate of the PhD program Drucker developed and taught for practicing executives at the Peter F. Drucker and Masatoshi Ito Graduate School of Management at Claremont Graduate University where Cohen now serves on the Board of Visitors. He writes a monthly column, Lessons from Peter Drucker, for several Internet newsletters including Human Resources IQ and is president of the California Institute of Advanced Management, located in El Monte, California.