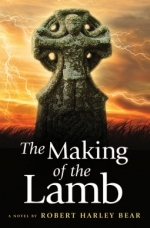 Robert Harley Bear wrote intriguing historical fiction novel The Making of the Lamb around the ancient legend, that Jesus Christ traveled to and stayed in England during as teenager. The “missing years” between being in Jerusalem’s Temple at age 12 and Jesus’ ministry’s start at age 30 are now used to learn obedience to God the Father, and to experience everything a normal teenager would. Jesus Christ dreams of restoring the kingdom of David and lead his people into freedom. When his uncle Joseph of Arimathea (the one that would eventually bury his nephew in his own grave) is a famous salesman. He brings Jesus and his own son, Daniel with him to Gaul and England, where local people live in relative peace. Among the druids Jesus learns to figure out his own position, the character of his heavenly Father and the mission he’s commissioned and committed to.

What truths can be found in pagan religions? What is freedom of choice? What does it mean to be fully divine and fully human? How to explain that you have a heavenly Father, and that He is still One True God? Would you give up your life to save humanity, hundred people, ten, a beloved family member that was seduced by the devil or a former slave that only caused you great trouble?

The book relives the native native late iron-age Celts, their crafts, religion and justice. Sometimes it reads like an Asterix & Obelix comic book, often as a well-balanced attempt to grasp the core of Jesus Christ’s mission. Several parables, tenets about the kingdom of God and the concept of die to your flesh and being reborn, you know from the gospels, are fostered here. Wrestling with God, just like Jacob and Job did, on the summit of what’s now known as the Glastonbury Tor, seeking mercy in Stonehenge and the obligation to return to Israel. All packed with a couple of historical flashbacks in medieval and contemporary England to decipher the mysteries of this largely unknown English contribution to Jesus Christ’s ministry.

Since 2004, Robert Harley Bear has studied late Iron Age archaeology, writings about druids from Irish legends to the annals of Julius Caesar, biblical history, Roman history and stories and legends of the missing years of Jesus Christ. Robert Harley Bear is an attorney and an information technology consultant. In 2005, he was baptized at St. Paul’s Parish, K Street, in Washing-ton, DC, where he remains an active parishioner to this day. He taught the high school confirmation class for several years. He enjoys competitive sailing and races an Albacore, a small two-man dinghy, around Chesapeake Bay and internationally. In 2011 he won the Chesapeake Bay Yacht Racing Association high-point trophy for the Albacore class.

More on the book, its backgrounds and comments from readers: www.makingofthelamb.com.

Eirth Publications granted me a free review copy through Netgalley to provide you my first-hand impressions.