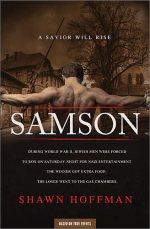 During World War II, Jewish men were forced to box on Saturday night for Nazi entertainment. The winner got extra food. The loser went to the gas chambers. Shawn Hoffman took this aspect of the cruelties in Auschwitz-Birkenau, the stories, Saul, an Auschwitz survivor, told the author, and recent discoveries on the medical experiments  Dr. Joseph Mengele did there to build his plot.

The Jewish Samson Abrams, 1936 Olympic boxing participant, made a life or death decision in 1940 in Polish Kraków rescuing a young Jewish boy beaten by the Nazis. That act costed him and his family much. He tried to escape the penalty (being brought to Auschwitz), but let the love for his dear ones prevail. They end up in the concentration camp, labored, digged mass graves and tried to survive. As soon Samson is recognized as the former boxer, lieutenant colonel Rudolf Höss offered Samson a deal: boxing matches on Saturday night. The loser will be sent to the gas chambers, the winner gets an additional share of food.

Remarkably, Samson is stronger than all of his opponents. Maximilian Kolbe, a Catholic monk also at the camp, is the one that calms down the anger and rage again and again. Don’t blame God for the evil men does. The monk strongly testifies about his Christian motives to help the Jews and stand for justice amidst the greatest cruelties you can think of. Is there a God? Why do the Jews have to suffer all these? Who can you trust? Will human power prove the Jewish to be superior to the Aryan race? “Not by might or power, but by the Holy Spirit…” is the lesson from both Old Testament Samson as well as this 20th century giant, tormented by the ongoing murders on his family members.

Step by step you feel your anger grow, as injustice does. And where you feel that it’s too coincidental to have Adolf HItler, Heinrich Himmler, Höss, and the angel of Death Mengele show up in this same plot, Hoffman throws in additional rounds, changed rules, bruises and opponents. After a culminating fight with Max Schmeling even Mengele is challenged to get in the ring. Samson: a Savior Will Rise strikes nerves, even though foot notes and historical details may distract for a minute. A powerful work of historical fiction.

Shawn Hoffman is an actor, screenwriter, and producer whose credits include landing a leading role in Broadway’s The Survivor, serving as a producer on the NBC show The Apprentice, and appearing in films and TV shows for Lion’s Gate Studios, Disney, NBC, ABC, CBS, FOX, and MTV. Over the last ten years, Shawn has written and sold ten screenplays, including for the movie adaptation of Samson, and his film Hometown Legend won several festivals.

I received a advance review copy from the publisher through Netgalley to serve you with my review.