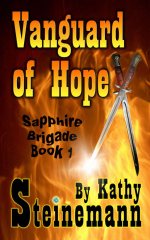 Vanguard of Hope is Kathy Steinemann’s tenth book and was published February 10, 2013. It was my first encounter with her writings. In this book 1 about the Sapphire Brigade takes you back to Lisetville in 1890 for an interesting historical fiction / romance / whodunnit setting. Written as a series of diary notes by Hope. She was raped by her father when still a small girl. Growing up she struggles to find her true love, and establish lasting relationships with her sister Ruth and other family members. A vigilante group called The Sapphire Brigade pops up, offers Hope protection while strange murders take place. Father, the rapist, is killed, or wasn’t he? And then Hope’s first husband Peter Bartholomew died. Solomon, the biological father of Hope’s first child, black, subject to racism and eager to keep his secret father ship hidden . His death shocked Hope again, but later he was reported as still being alive, ending up as carriage driver for Hope and her new husband. Doctor Owen Vargas, first attractive, dismissed and later retained. Several storylines and possible members of the mysterious Sapphire Brigade are mixed and suggested. At the end, after Hope’s own burial, snippets from the local newspaper and other reports are added. The short chapters or diary entries keep the reader engaged until the end. And there’s plenty left for the sequel to be told. Fortunately The Doctor’s Deceit: Sapphire Brigade Book 2 is already available; Book 3 Sawbones in Blue is coming soon.

The issues of child sexual abuse, racial prejudice and the effects of Amylotrophic Lateral Sclerosis, ALS (a rapidly progressing fatal neurological condition now more commonly known as Lou Gehrig’s disease) deserve your attention. Especially for sexual abuse Steinemann warns, that modern victims do not have a protector like the Sapphire Brigade. Parents are a victim’s best “vanguard of hope” and points to organizations that can assist parents and survivors.

Kathy Steinemann won provincial public speaking and writing awards during her early years, wrote the school news column for the community paper, and was a regular contributor to her high school newspaper.
Her career has taken varying directions, including positions as editor of a community weekly, computer-network administrator, and webmaster. She has also worked on projects in commercial art and cartooning.