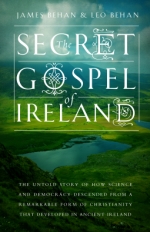 In The Secret Gospel of Ireland, brothers James & Leo Beham shed light on the special role the Emerald Island played in the development and spread of Christianity in both Europe and America. Many celebrate St. Patrick’s Day each year, but only a few know the backgrounds. St. Patrick, born as a slave in nowadays northern Africa lived in the final years of the Roman Empire. The  ancient Romans never conquered Ireland, Patrick sailed to Ireland and planted the gospel there. In the process of converting from paganism to Christianity, the ancient Irish developed a remarkable approach to the Christian faith that would one day make science, democracy, and our modern world possible. They resisted to place earthly kings to head the church. Irish monks began pouring out of Ireland to build monasteries throughout Western Europe. Lindisfarne and Iona were famous outposts for further spreading the gospel. Monasteries included schools, hospitals and became the primary social institution in Western Europe during the so-called Dark Ages. They led to the creation of Europe’s first universities at Bologna, Paris, and Oxford. And the Irish monks invented lower case letters (which was called Carolingian minuscule). These developments in culture, education, government, and writing would eventually lead to the development of our modern world., including modern science and democracy.

In The Secret Gospel of Ireland there’s a lot of attention to Middle Ages history. You meet several church fathers like Augustine of Hippo and Thomas Aquinas and reformers like Martin Luther, John Calvin and Huldrych Zwingli up to Thomas Jefferson and the foundations of modern era European countries and the United States of America. Thanks to St. Patrick.

James Behan is a graduate of Harvard Law School and holds a bachelor of science degree from the University of California, Berkeley.  He is a lawyer who specializes in international business transactions and has practiced law in cities throughout the United States and abroad, including New York, Tokyo, Palo Alto, and Chicago.  He possesses a deep interest in the relationship between science and religion, as well as a passion for golf, which he enjoys sharing with his wife and family.

Leo Behan is a graduate of Boston College Law School and holds a degree in history from the University of California, Berkeley.  He is a lawyer and a military veteran, having served in the United States Air Force JAG Corps. He is passionate about history and philosophy, as well as classical guitar.

James and Leo are brothers who originally hail from the San Francisco Bay Area.  They have inherited their love of Ireland and the Irish from their father, who immigrated to America from Ireland many years ago.