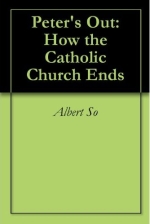 Albert So takes a humorous twist on the possible next Pope of the Roman-Catholic Church, of course Peter, just like the first one. The last pope standing in Peter’s Out: How the Catholic Church Ends follows the all-American Peter Bondeo (June 6, 1960) from his childhood in Lathrop Village, Michigan, his vows and transgressions to all kinds of adventures, bot with sexuality challenging his vow to God for celibacy, but also a world tour. He’s posted in the Russian Far East, even east of Siberia, in Jordanian Wadi-Rum and on Island of Merdette as cardinal / pastoral worker while stumbling his way through Catholic rites, culture and all kinds of local flavours. This revisionist history, epic and silly, understandning and oversexed ends up with the election of a new pope. Yes, it turns out to be Peter. What will he do with the Roman Catholic Church? I will not disclose that here. A couple of warnings: the book’s full of strong language, but also hundreds of end notes, which are part of the plot as well. If your faith or commitment to the Roman-Catholic Church can stand a poke or five hundred, relax and practice your laughing muscles.

Albert So—author, composer and provocateur—has accepted, if not necessarily embraced, the fact that he will mostly likely die in obscurity.