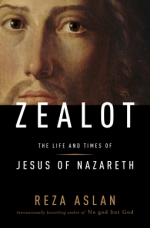 Every author has a purpose writing, an explicit or hidden agenda. Some time ago I read Jacob Slavenburg – Valsheid in geschrifte (1995) and Katrijne Bezemer – Op weg met de Gnosis, both stripping Jesus Christ to his logeia, assumed words literally spoken by the historical Jesus, the core ethics to cling to in a gnostic manner. Others, like Bart Erhman’s Misquoting Jesus emphasize the human editing of biblical texts, leaving faith and Christianity as forgerous and misleading. The Iranian-American author Reza Aslan (1973) introduces himself as having found Jesus Christ on a youth camp when he was 15. As soon as he began studying, he abandoned his faith in Jesus as only begotten Son of God, Christ and one you can have a personal relationship with. Though not revealed in this book, it’s no secret, that the author is a practicing Shia Muslim. Core to the Islamic creed is a god without a son, so it shouldn’t be surprising the reader, that a cut-off between Jesus and his heavenly Father, is Aslan’s paradigm.

According to the author the result of 20 years of research was laid down in Zealot – The Life and Times of Jesus of Nazareth. Given his age, not all research can be his own. Some reviewers even doubt whether he actually has written the book himself. I’ll leave that question for the author to answer. In my opinion Aslan, author of the internationally bestseller No god but God compiled a fascinating, provocative, and meticulously researched biography that challenges long-held assumptions about the man many know as Jesus of Nazareth.

As a myth buster Aslan confronts the reader with difficulties on his birthplace (Bethlehem), cousin / herald John the Baptist, workmanship, message (did or didn’t he reveal himself as Messiah, God’s Son, King of the Jews? What were his aspirations? What is the Kingdom of the heavens/God.. all about?), quotation from the Tenach, prophesies about the Christ, Jesus’ “crime”, death, and resurrection. Crucial is the concept of being “zealous”, the jealous anger that YHWH already showed when He gave Moses the Ten Commandments. And no, Aslan doesn’t make Jesus a Zealot, since that party simply didn’t exist during Jesus’ life.

In the second part he devotes a lot of attention to the division between the Jewish followers of Jesus, headed by James the Just, Jesus’ brother, Peter, and the gentile converts by the ministry of Paul, portrayed as zealous too, but wandering away from his Jewish former belief system. And to put it mildly, Aslan’s no friend of Paul. Skip 200 years and you’re watching the bishops of this new religion shape the canon of the New Testament and declare a creed in Nicea that prefers a distance from the historical Jewish Jesus, zealous for the Kingdom of God, and a God became man, died for our sins, was risen by God and restored glory again. a peaceful spiritual teacher . And he grapples with the riddle of how Jesus understood himself, the mystery that is at the heart of all subsequent claims about his divinity.

By telling and quoting a lot (the remaining 30% of the book contains notes), emphasizing the errors made by fellow humans, it’s easy to forget the balk in your own eyes. Aslan reduces Christ’s revelations to a messianic secret, which only hints, not reveals. Nowhere the nature, activities and influence of the Church is mentioned. Acts 2, Hebrews and epistles from Peter, John’s Revelations, are ‘forgotten’. His ethics and Beatitudes, which the gnostics need so much, don’t get attention, neither do concepts like sin, punishment, atonement and redemption. What remains is a good man with a message and a goal, to bring freedom, a message worth believing in, but no more. A concept that perfectly matches an Islamic point of view: you can’t ignore that Jesus actually existed, but his followers really messed things up.

Born in Iran in 1973, Reza Aslan lives in Los Angeles with his wife (author and entrepreneur Jessica Jackley) where he is Associate Professor of Creative Writing at the University of California, Riverside. Aslan’s family came to the United States from Tehran in 1979, fleeing the Iranian Revolution. He grew up in the San Francisco Bay Area. At the age of 15 he converted to evangelical Christianity. In the early 1990s, Aslan taught courses at De La Salle High School in Concord, California.

Aslan holds a Bachelor of Arts’ degree in religions from Santa Clara University, a Master of Theological Studies’ degree from Harvard Divinity School, a doctorate in the sociology of religions from the University of California, Santa Barbara, and a Master of Fine Arts’ degree from the University of Iowa’s Writers’ Workshop, where he was named the Truman Capote Fellow in Fiction. It was during the summer before he went to Harvard that he converted back to Islam.

In August 2000, while serving as the Truman Capote Fellow at the Iowa Writers’ Workshop, Aslan was named Visiting Professor of Islamic Studies at the University of Iowa, becoming the first full-time professor of Islam in the history of the state.

I received an uncorrected proof advance review copy from the Random House Publishing Group through Netgalley to provide you my impressions.