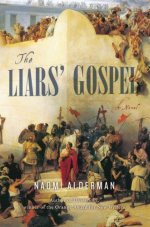 Story-telling is lying, a confession author Naomi Alderman also makes in her re-imagination of first-century Judea and Galilee in The Liars’ Gospel. She has chosen four people close to Jesus before his death to have different points of view of the life and death of Jesus, and of the Roman occupation. Latin or Greek familiar names are put back in Hebrew to give the story an authentic (and for some realistic) picture. Yehoshuah, who grew up in Nazareth, wandered with his disciples, healing the sick and casting out demons has a narrow escape from death. His deeds are merely tricks, learned from a local magician. And by escaping the Romans, by shaving his beard he simply walks off the stage, never dies, let alone resurrects. Mother Miryam (Maria) doesn’t understand a bit of her son’s birth, family matters and disappearance. Friend Iehuda (Judas) loses his faith, where Caiaphas, the High Priest of the Temple is a traitor and collaborator with the Romans by giving up Temple treasures and cheating during the Yom Kippur rituals. Rebel Bar-Avo (Barabbas) is the true hero, zealous and rebellious, striving to disturb the status quo. Women are raped whenever men want, bad language (not very first-century English, duh). After all, it’s a very Jewish approach to write Christianity off as a bastard offspring from the true religion, but some cut-and-paste facts and fiction from historians like Josephus, the New Testament Gospels and personal beliefs.

Naomi Alderman is the author of Disobedience, which won the Orange Prize for New Writers and has been published in 10 languages. She contributes regularly to the Guardian and lives in London.