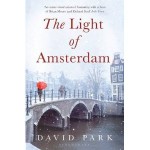 How does a painter paint light? Why would you admire a painting by Vermeer and despise The Night Watch by Rembrandt, visiting the Rijksmuseum in Amsterdam? It’s December, Christmas approaching and three different  families set off for a weekend to the Dutch capital. Problems at home, whether in the US or in Ireland, are layered, just as a painting and the main characters may discover a new perspective, new inspiration and light. A father struggles with his recent divorce and getting along with his teenage son. What should his position be on musical tastes, cannabis usage and a proposal to see the local red light district? A mother that’s being accused of stealing a bracelet, actually gives it away to her only daughter to express her love. She also struggles to get a healthy relationship with her daughter (again). Dressed as Indians on a hen party with girlfriends: how far will you go to bridge troubled waters? Third, there’s a husband that treats his wife to a birthday weekend away, and by doing so, contributing to uncertainties about desires, motherhood and age.

Against the background of the parks, museums, canals, restaurants, bars and hotel rooms our beloved Amsterdam, the different storylines evolve and challenges the reader to dig into life’s complexities. I had difficulties at the start of this novel to get into the story. Opening at the fallen football star’s funeral, the novel concludes at a disappointing Bob Dylan concert in Amsterdam. The story has aftermaths, flash backs, past meets presents and overcoming comedowns and disappointments.

David Park has written seven books, most recently the hugely acclaimed The Truth Commissioner. He was the winner of the Authors’ Club First Novel Award, and the Bass Ireland Arts Award for Literature, and three-time winner of the University of Ulster’s McCrea Literary Award. He has twice been shortlisted for the Irish Novel of the Year Award. He lives in County Down, Northern Ireland, with his wife and two children.

I received an advanced review copy through Netgalley.com.