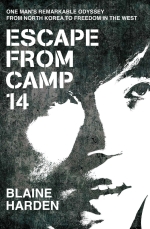 Blaine Harden interviewed Shin Dong-hyuk, born in 1983 inside Camp 14, one of five largest and most cruelsome political prisons in the mountains of North Korea. Luck was on his side when Shin managed to escape the camp, survive in North Korea, cross the Chinese border, survive on the other side and eventually migrate to South Korea and the USA. Where Shin’s earlier memoir flopped, this version, enriched with maps, drawings, history and interview output from others definitely got the attention of many readers around the globe. Camp 14, though visible on Google Earth, and yet unreachable from the outside world. It is located about 55 miles north of Pyongyang. Shin’s story is cruel and reminds some readers of the Nazi concentration camps in World War II, or the Siberian Gulagh camps in the USSR era. A complete control camp, suicide an serious option for those that can’t stand the physical and psychological pressures from long working days, endless punishments and other ways to repent from sins against the Kim Jong Il dynasty.

No other born in a North Korean political prison camp ever has escaped and survived before Shin. And while his escape may be filled with luck with other relatives and a fellow that would travel with him dead, Shin’s story is unique. Blaiden’s additions also share insights from the difficulties to socialize, get customed to the western world, trust people and build professional and private relationships.

Blaine Harden is a reporter for PBS Frontline and a contributor to The Economist, based in Seattle, having completed a tour as the Washington Post’s bureau chief in Tokyo. He is the prize-winning, acclaimed author of two books: Africa: Dispatches from a Fragile Continent (Norton,1990) and A River Lost: The Life and Death of the Columbia (Norton,1996).