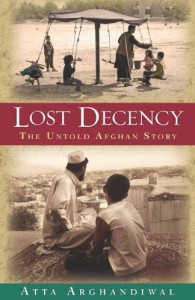 Where The Kite Runner and 1,000 Splendid Suns (Khaled Hosseini) tell their own Afghan story, Atta Arghandiwal has a a lifeline worth telling too. In his Lost Decency the author takes you with him from the developments in the 50s, the Shah and relative freedom to the occupations by the Russians and the Taliban in more recent years. Where Atta succeeded in fleeing the country and buidling up a new life in Germany and the US, many weren’t that lucky. Afghanistan, once beloved and peaceful nation, Kabul made famous by its kite runners and sportsmen, turned into one of the deadliest and most dangerous in the world. Lots of soldiers from countries all over the world tried to intervene, rebuild trust and do something called peace-keeping, where other powers striving for power and a larger stake in the resources invested in Afghanistan, prevent that.

While this book has a personal happy end, Afghanistan’s story isn’t finished yet. Much work is to be done. It’s up to every inhabitant en refugee to decide whether it’s better to stay abroad or return to their home country and rebuild it from within.

Atta Arghandiwal was born in Afghanistan but has spent over half of his life in the West. As one of tenkids within a large military family, Arghandiwal spent much of his young life traveling and attending school in various parts of the country.

Shortly after graduating from highschool, Arghandiwal joined the Afghan Air Force to finish his militaryassignment. After witnessing unexpected political changes, beginning with the 1978 communist coup d’etat, and ultimately leading to the invasion by the Soviet Union, Arghandiwal left his home country in August of 1980 and became a refugee in Germany. He immigrated to the United States in December 1981, where he went on to build a successful banking career.

With deep passion and pride in his heritage, Arghandiwal has written the true Afghan story in order to increase awareness about his country’s political upheaval and the innocent people who have been caught in the chaos. He has remained an independent banking consultant while attending to his lifetime passion of writing.

Arghandiwal is married and lives with his wife and two children in Northern California.