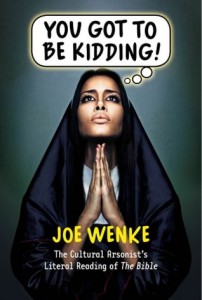 In You Got To Be Kidding! – The Cultural Arsonist’s Literal Reading of the Bible, Joe Wenke intentionally sets fire to the bridge between biblical stories and personalities and our contemporary understanding. Twisted with humor, straight language and a little sarcasm, this personal theology is both provoking and entertaining.

Humorous questions like Why did God turn Lot’s wife into a pillar of salt? Were there no other seasonings available? or Who reported the desert encounter between Jesus and Satan or Jesus’ prayer in Gethsemane when his disciples were all asleep? won’t rock the boat. You have to accept wordings like: “So Moses saves the people from total destruction at the hands of God, and what thanks does he get in return? A rebellion. Two hundred fifty chiefs led by a guy named Korah confront Moses and Aaron and basically say what’s so special about you? Hey, who made you the holy one?

Now I’m sure Moses was laughing to himself at this affront, thinking, “That would be God, asshole.” Wenke touches upon the cruelties in much of the Old Testament stories, from the penalty on the first trespassing in the Garden of Eden throughout God’s war crimes and the Sheol as a mass grave somewhere below the surface of the earth. Ecclesiastes is a no-read if you don’t want to get depressed. And the prophecies, they’re all so vague, that any interpretation may be right.

Jesus is cool, because he does even greater magic tricks than Old Testament heroes like Moses, Elijah and Elisha. He’s cool too, because he upsets the status quo, hangs out with poor and needy, shows mercy and emotion. The disciples are loosers, many journalistic sins committed by the authors of the gospels and Paul…. Paul’s the guy who institutionalized christianity, labeled sex icky and demoted women.

Wenke decodes the parables, powerful serving the core messages to his readers. There are many unanswered questions. And “Revelation is a trip. If you want to understand it, I suggest you first read the collected works of Edward Lear and Lewis Carroll and play a lot of Beatles songs backwards. I don’t want to get all caught up in my underwear right here when I’m ready to wrap up, so I’ll just cut to the chase and check out who’s in the house at John’s Apocalypse Lounge.”

If you made it to the end of this book and still believe (don’t you worry, I still do, because I don’t share this a-cultural, often out of context reading and stripped-from-humbleness interpretation of the Bible): congratulations!

I got an advance review copy through Netgalley to provide you my personal opinions on this book.