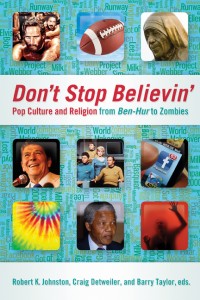 In Don’t Stop Believin‘, Pop Culture and Religion from Ben-Hur to Zombies, Robert K. Johnston, Craig Detweiler & Barry Taylor, plus a host over other co-editors present religious or theological themes in 101 well-established persons, brand names or phenomenons in modern era pop culture. Other books focus on the way to approach popular culture as a Christian, such as in Ted Turneau’s Popologetics: Popular Culture in Christian Perspective. Vishal Mangalwadi shows in The Book That Made Your World how Christianity shaped (popular) culture. Don’t Stop Believin’ works the other way around. What’s the transcendental or supernatural in horror by Stephen King, Alfred Hitchcock or Quentin Tarantino? What’s the effect of idolizing masculinity, femininity or sexuality in the performance of Michael Jordan, Marilyn Monroe, Madonna or Calvin Klein ads? What are similarities in or differences between The Chronicles of Narnia (C.S. Lewis), The Dark Materials (Philip Pullman) and Harry Potter (J.K. Rowling)? What’s the (spiritual) legacy of Malcolm X, Bob Marley, Deepak Chopra or Mother Teresa? What did computer games like Doom, SimCity, World of Warcraft bring our youth? And what are the religious hooks in Star Trek, Star Wars, Doctor Who, The Simpsons and Southpark? And isn’t the way we embrace Apple’s products like iPod, iPad, Macintosh, the social network Facebook, Dr. Phil and Oprah Winfrey or – as many Christians did – The Left Behind Series or the Megachurch? The 101 short explorations are arranged chronologically from 1950 to the present and will certainly bring back memories or inspire to read, watch or think further.

Because of the controversial character of everything cultural, let alone popular culture seen from a religious perspective, the authors warn the readers that they don’t make holy, what isn’t necessary holy. Creation never surpasses the Creator. We all are fallible people. As a conclusion The Mystery Discerning Business is saved for the last 10 pages. It deals with the questions whether and how to deal with popular culture. In a proactive or reactive manner? Dismissal or acceptance? There’s where your own soul searching may continue. As the authors in one of the entries ask: is X a Christian? Does it matter? Are you a Christian? Does it matter? Anyone who is interested in popular culture and its impact on our spiritual lives, can grasp this 101 book.

About the Authors
Robert K. Johnston is Professor of Theology and Culture at Fuller Theological Seminary. He is the author of Reel Spirituality: Theology and Film in Dialogue and Finding God in the Movies: 33 Films of Reel Faith, and editor of Reframing Theology & Film: New Focus for an Emerging Discipline.

Craig Detweiler is Associate Professor of Communication at Pepperdine University. He is the editor of Halos and Avatars: Playing Video Games with God; the author of Into the Dark: Seeing the Sacred in the Top Films of the 21st Century; and coauthor (with Barry Taylor) of A Matrix of Meanings: Finding God in Pop Culture.

Barry Taylor is Adjunct Professor of Popular Culture and Theology at Fuller Theological Seminary and coauthor (with Craig Detweiler) of A Matrix of Meanings: Finding God in Pop Culture. He is a professional musician, painter, and the leader of New Ground, an alternative worship gathering in Los Angeles.