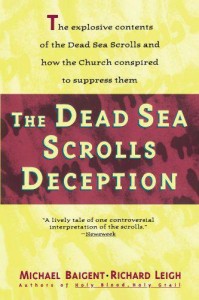 Many have heard of the Dead Sea Scrolls, only a few have read them in a modern translation, and even less people were able to study the originals. I have an English translation called The Dead Sea Scriptures by Theodor H. Gaster dating back from 1976. In their 1991 title The Dead Sea Scrolls Deception, Michael Baigent and Richard Leigh offer you their encounters with the deceptive process and productivity of archeology, theology and paleography researchers involved in the exploration of the Scrolls since they were found in caves near Jericho on the hills western of the Dead Sea. Somehow this book was promoted to me in 2012, though it’s not a new version, except for the appearance as e-book, unimaginable in a 2,000 old jar with leather, parchment or copper scrolls. Baigent and Leigh set out to discover how a small circle of orthodox (Catholic) biblical scholars gained control over the Scrolls, allowing access to no outsiders and issuing a strict “consensus” interpretation. As Roland de Vaux, director of Excavations in Jerusalem stated in his preface to The Dead Sea Scriptures: “…which gives reasonable solutions and rejects the absurd interpretations which gave recently been given.” Baigent & Leigh make clear how present pope Benedictus XVI, Joseph Ratzinger, operated as modern Inquisitor strictly controlling the process and interpretation of the texts. But also the various governments, the black market and the ugly way of conducting the first examinations of the scrolls back in the 40s and 50s of the twentieth Century. The Dead Sea Scrolls Deception not only testifies of the deception in this piece of research, but also shares possible explanations on the nature of the Qumran community, and the connections with both positions and persons from the Temple priests in Jerusalam, Zealots and Early Christian Church. The authors follow the conclusions that Robert Eisenman drew from the scrolls. Even in 2012 it costs a lot of effort to distinguish between ‘complete’ translations or ‘sound’ interpretations of the Dead Sea Scrolls texts. Upon a reading of the The Complete Dead Sea Scrolls in English may be the one. Upon reading the Wikipedia article on the Dead Sea Scrolls, it’s clear that Baigent & Leigh are narrow-focused too, disregarding the Biblical books found and roughly concentrated on historical errands and after that the Eisenman thesis. Why no other thesis? Why not a solution or synthesis based on own research? As with the Bible itself, I’d prefer reading the sources, not the commentaries first.