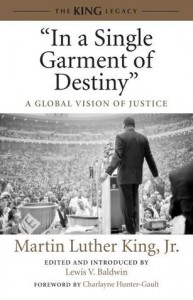 Even today many people can’t tell you more about Dr. Martin King jr. then “I have a dream” or qualities like “a southern civil rights leader” or “the American Gandhi”. Lewis V. Baldwin & Charlayne Hunter-Gault gathered statements, sermons and speeches by Martin Luther Jr. King from various libraries. In a Single Garment of Destiny : A Global Vision of Justice, part of the King Legacy Series, treats King’s positions on global liberation struggles through the prism of his own words and activities. Not only the rights of the Negro, but global poverty, warfare in general, the South African Apartheid regime, the Viet Nam war and the interreligious dialogue are subject too of his sermons. Positions that helped the black American regain their freedom and really overcome, influenced the Apartheid regime to ultimately free well-known prisoners like Nelson Mandela. The positions on religion and the Viet Nam war caused animosity as well. Did King leave his true Christian nature? What about the amount of black casualties among US soldiers in Viet Nam? You’ll read from him directly. In a single garment.. includes previously unavailable material pulled from archives. Every theme is introduced by Lewis Baldwin. He is regarded as one of the foremost scholars of King.

Dr. Martin Luther King, Jr. (1929-1968), Nobel Peace Prize laureate and architect of the nonviolent civil rights movement, was among the twentieth century’s most influential figures. One of the greatest orators in U.S. history, King is the author of several books, including Stride Toward Freedom: The Montgomery Story, The Trumpet of Conscience, Why We Can’t Wait, and Where Do We Go from Here: Chaos or Community? His speeches, sermons, and writings are inspirational and timeless. King was assassinated in Memphis, Tennessee, on April 4, 1968.

Charlayne Hunter-Gault is an author, journalist, and foreign correspondent for National Public Radio. In 1961, she was one of two black students to desegregate the University of Georgia.

I received an advanced review copy through Edelweiss to provide you my impressions.