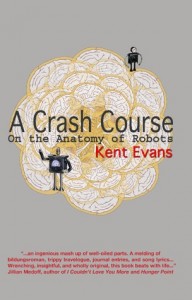 Kent Evans mixes all kind of styles (poetry, linear and non-linear storytelling, travelogue) and braindumped it into A Crash Course On the Anatomy of Robots. Some reviewers compared this work with a collision between Hunter S. Thompson and Pico Iyer. Damien Wood’s adolescence years combine failures in creativity, finance, sex. His half-Asian lineage, cultural clashes when traveling make him unable to be emotionally intelligent. Damien tries to reach his inner self by engaginng in hollow relationships. As if a robot lives his life. At the turn of the century Damien’s mother dies after a long illness. The 9/11 attacks sparkle a reign of fear and terror. Damien’s emotions emerge and initiate travels through the Americas and Southeast Asia. Finally Damien has become a wanted man, no longer a robot. I found it difficult to read and concentrate on the actual storyline, so be warned.

Extra
The original soundtrack for A Crash Course On the Anatomy of Robots was written and recorded at On Studio in Guanajuato, Mexico. The album will be available on iTunes prior to the release of the novel and come free as a companion piece with the Kindle version.

About the author
Kent Evans was born in New York City under no choice of his own, in 1975. He is half Cantonese and half UK mongrel (mostly Irish one might assume based on his drinking habits). He grew up between New York, Connecticut and Rhode Island and has traveled extensively throughout the US, Canada, Mexico, Europe, Asia, and the Caribbean. Kent Evans is the author of Malas Ondas: Lime, Sand Sex and Salsa in the land of conquistadors a semi-autobiographical novel about self-destruction throughout Latin America and finding that corniest of motivators love. Lately he chooses to pursue his craft through music and fiction (well sort of fiction anyhow). His performance of choice involves gathering non-bands) and performing poetry in a live Jazz/Trip-Hop format. In the new millennium Kent has done shows throughout the states, Europe and Mexico, including the International Arts Festival of Cervantino, RAI in Spain, and the Artery in Houston. He had appeared on NPR for shows including Nuestra Palabra, the Front Row, and Living Arts showcase.

I received an advance review copy through Netgalley.com to provide you my review.